on September 03, 2009
How does a week get away from me like that? I had every intention of blogging more often ... those who know me well know that I am rarely at a lack for words ... but somehow it just didn't get done. Maybe it's the late summer doldrums: 27 days left till October 1st and my enthusiasm for my garden is at the lowest it has been or will be all year. It's ironic since we've had several mornings of cooler temperatures, an earlier than usual foreshadowing of what fall will bring. The down side is that the weather inevitably returns to its usual hellatious levels, which are even more difficult to work in once we've had that hint of cooler weather. I slogged about out front today, slapping mosquitoes and wondering who told the grackles to hold a meeting in my trees, while despairing over the renewed absence of rain. By the time I came in, I was so disgruntled, disheveled and disheartened that I took to my bed like a Victorian gentlewoman.

Still and all, if I stop and think about it, I can find things that make me smile and remind me that it's all worth it. So for this Thursday, I offer three things that have made me smile this week.

A daylily whose name escapes me: this is one of 4 that have rebloomed in the last 2 weeks. 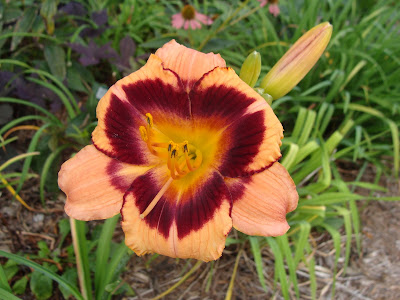 Finally, FINALLY, I'm having success growing Berlandiera lyrata, Chocolate Daisy. I've tried them several times and lost them but mulching them with river rock (aka egg rock) seems to have made the difference. I've also found that cutting them back after bloom brings on new growth and more flowers. And, yes, they really do have a lovely chocolate fragrance! 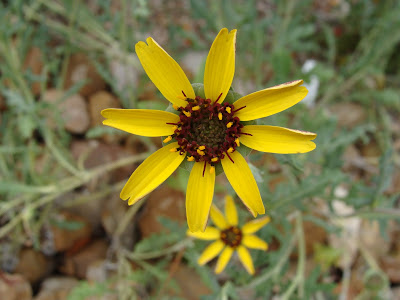 I bought this sign at a pottery in Rockport, Massachusetts back in 2001. It reminds me not only of my visit to a delightful little town but the reason for my trip to the East Coast.
A member of my e-mail group, the Garden Bobs, was getting married and another member of the group was hosting the wedding at her home in Vermont. Many of the group had never met each other but we gathered from across the country to celebrate the happy event of M&N, who each looked across the Thanksgiving dinner table the previous year and found a kindred spirit. Her son and his daughter were the hosts for that dinner so M&N are now both step-parents and in-laws to the younger couple. Each time I look at the sign, I think about what a wonderful trip that was AND how funny life can be. Oh, yeah, that's a white Cypress vine, seeds for which were given to me by Peter, another member of the Bobs. 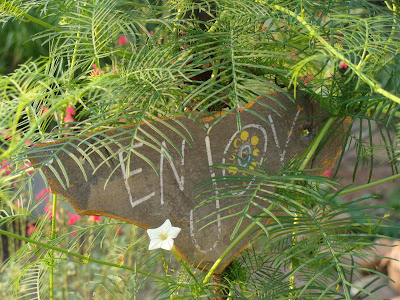 We did get a brief rainstorm about an hour ago and the radar shows some serious storms just north of us. Will they move in our direction? Perhaps, perhaps, perhaps!

Kathy said…
Glad to hear of your success with the chocolate flower, and the happy wedding memories.
September 3, 2009 at 8:02 PM

LindaCTG said…
I love your Thursday three! I've been totally amazed with my chocolate flower. I just built it up with a little crushed granite, and I keep it pruned. Honestly, I thought this was an experiment that would fail, but it's hanging in there, despite the drought. Want more! So glad you got a bit of rain. Oh, love that daylily too.
September 3, 2009 at 8:25 PM

Dee/reddirtramblings said…
Cindy, I know the name of that daylily. I just can't think of it. Darn. Loved your story about the friends who met at their children's wedding supper. I am in love with Cypress vine. I grew it for the first time this year. Love it! I want that chocolate flower, but don't know if it would do well here. Hmmm, all things to cause joy.~~dee
September 3, 2009 at 9:05 PM

Mr. McGregor's Daughter said…
That Daylily looks so lovely and fresh, it's hard to believe that you're still short of rain. I wish I could smell your chocolate daisy - it's really cute.
September 3, 2009 at 9:43 PM

Jan said…
What a wonderful trip that was! So much fun. And remember the lobster? Haven't had any that good since then.
September 3, 2009 at 10:09 PM

AuntSally said…
Hard to believe that wonderful trip to Vermont was so long ago! The daylily I brought back is still thriving, just like the romance of those lovebirds~
September 3, 2009 at 11:05 PM

Morning Glories in Round Rock said…
Don't beat yourself up about your lack of blogging--you do much better than I have. This summer heat has just taken the words right out of me--sapped them right out of my brain.

Your Daylily is a beauty! It looks as though it is a salmon color--very striking with the purple and yellows center.

Rose said…
I do hope by now you've had that rain. A beautiful daylily--that would bring a smile to my face, too. I love the way that gardening evokes certain memories; your trip sounds so enjoyable, and the garden sign is a great way to re-live it. Although we haven't had the horrible heat this summer that you have had, I find that this time of year, my motivation of gardening starts to wane a little, too. Of course, there are plans for a new flowerbed--that might get me going:)
September 7, 2009 at 9:32 AM