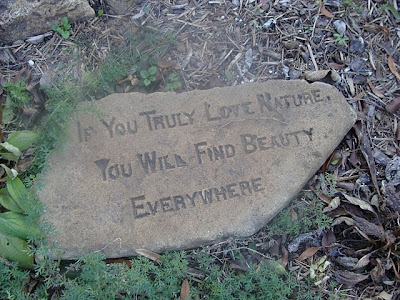 It's a lovely thought, isn't it? It's a little difficult to hold onto such sentiments when so much of what I see is withered and brown. Although the courtyard thermometer recorded a low of 32 last night, the official low was around 27 . There was ice in the pond this morning but by picture time this afternoon, that had melted and Larry, Darrell and Brother Boy were no longer hiding in the depths. That's variegated Dianella behind the pond: it doesn't look too shabby until you get closer and see that it's got brown streaks along with the green and white.

This Calibrachoa, Million Bells, is still in its quart pot, nestled in a larger pot sitting on a patio table. It's been uncovered throughout this cold spell and yet it continues to bloom and the foliage remains verdant. 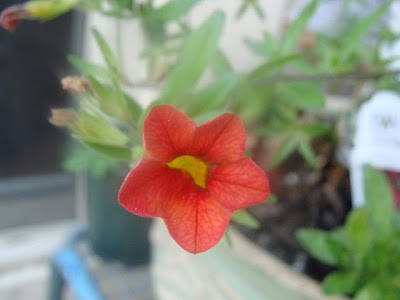 The artichoke, as I mentioned before, is quite dismayed by the conditions to which it has been subjected. IF it lives, I'm doubtful I'll get any artichokes from it. 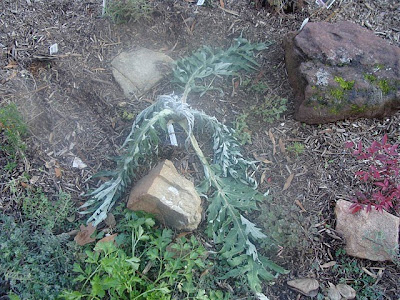 I can count on Gartendirektor Otto Linne to bloom when all other roses refuse. This one is planted on the back of the house under a window with a fireplace wall nearby. Maybe that's why it's still flowering or maybe it's just naturally cold hardy. Whatever the reason, it's another reason that I'm so fond of this particular rose, which began life as a cutting from a Texas Rose Rustlers' exchange. 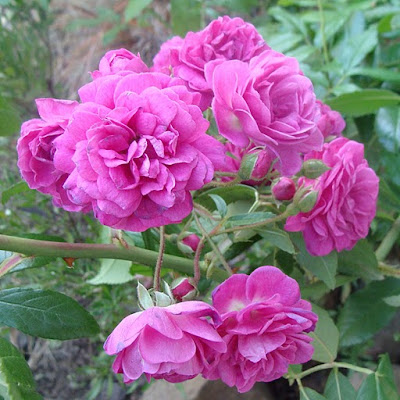 I didn't know what to expect of the pitcher plant, Sarracenia spp. Daina's Delight. These plants look so delicate with their fine tracing of veins that I didn't expect it to be that hardy. I'm happily surprised by how well it's held up thus far. Whether it's truly hardy, I'll find out in a few days. 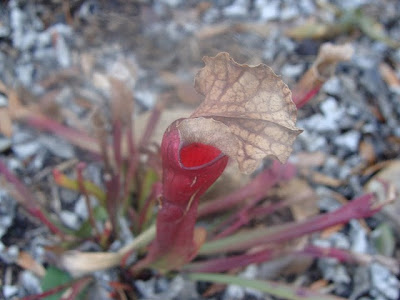 As I write, the temperature is 31 and falling ... once again the predicted low is 25. Temperatures will begin to rise tomorrow afternoon, though, and we should stay well above freezing for the rest of the week. I'm by no means convinced this is the last cold spell we'll endure. I can't shake the feeling that a February ice storm is in store for us. I have no facts or scientific theory to back me up, just a suspicion that Mother Nature isn't done with us yet.
freeze winter

Anonymous said…
Dear Cindy, I do so hope the worst is over by now and things will start to warm back up. That is the forecast for here so it might be for you as well. What a test this has been for plants and gardeners alike. It will be interesting to see what survives. We are thinking of you! :-)
Frances
January 11, 2010 at 9:45 AM

james A-S said…
Thank goodness somebody else, somewhere in the world is making a fuss about temperatures just below freezing. I always feel a bit wimpy when people in Canada or (presumably) Wyoming have 6 feet of snow and shrug it off as if it was a mere irritation while Britaion collapses when it gets a bit cold!
I feel much better thinking that even Texans feel the chill occasionally.
January 11, 2010 at 11:20 AM

Meadowview Thymes said…
I love that stone!
Funny--I have that same feeling about February. I was hoping that since we got "winter" in Dec/Jan, Feb would start our spring...
just garden dreams I suppose! :)
January 11, 2010 at 1:56 PM

Diana said…
Cindy - you still have some lovely things alive - even if the artichoke looks just a tad peaked! I'm with you -- I think Mother Nature has more in store for us for a while yet. I'm trying to just settle into it all!
January 11, 2010 at 6:47 PM

Cindy, MCOK said…
Frances, I hope all will be well at both Fairegarden and Wit's End. It will indeed be interesting to see who passes the test and who fails, as far as plants go!

James, after over a decade of mild winters, I won't say we Texans accepted it as our due but we were certainly acclimated to warmer weather. Come on over to my corner of Katy and whine when you need to!

MT, perhaps your garden dreams will come true ... I hope my nightmares DON'T!