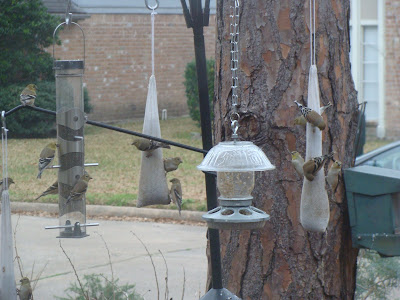 Despite the economic downturn and the possibility that it would cause their host to cut back on catering, a confinchent of American goldfinches voted to hold their annual Confinchion at Wit's End. Although the group is smaller in numbers than that of 2008, the Head Gardener continues to fill feeders with sunflower chips on a twice daily basis. Confinchion growers are delighted that this prized delicacy remains on the menu. 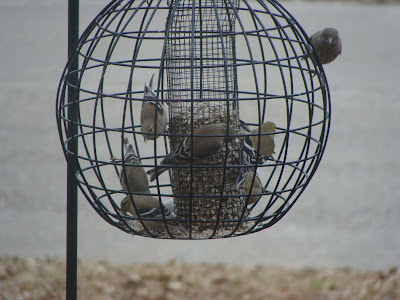 We've reproduced the report on the 2009 Confinchion below. Take it away, HG!

This just in: American Goldfinches have converged upon a suburban corner lot in Katy, Texas for their annual confinchion. Attendees agree that the new meeting place, a wood and cattle panel trellis built after Hurricane Ike destroyed the longtime confinchion center, is a definite upgrade from the old facilities. With more room to maneuver, sturdy wire upon which to perch while awaiting turns at the thistle socks, and adjacent bathing/sipping arrangements, it's not surprising that these colorful winter visitors give two wings up to the new construction. 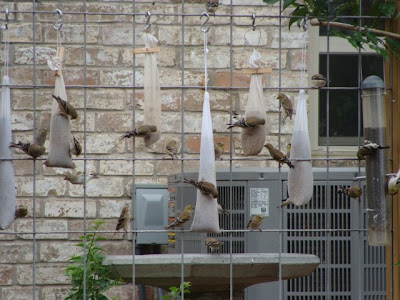 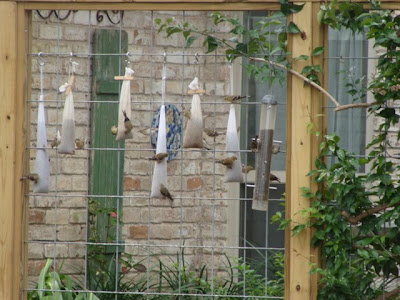 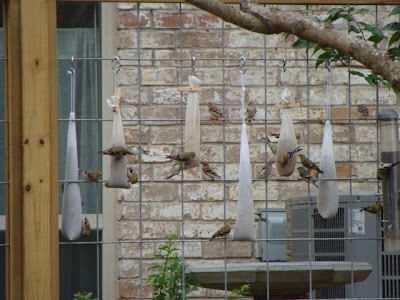 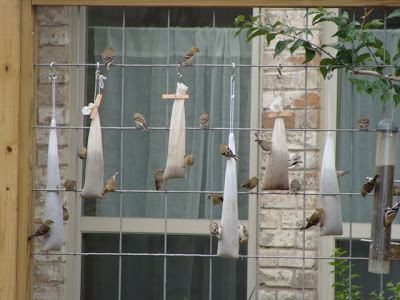 There have been some complaints, however, by those who prefer sunflower chips to thistle seed, that confinchion hosts have been less than diligent in refilling the tube feeders. The picture below would seem to bear out that allegation. However, when questioned on the matter, the Head Gardener noted that she was having great difficulty keeping up with what she called the unusually heavy demands of the chip-loving confinchioneers and that restocking those feeders twice a day is not always feasible. 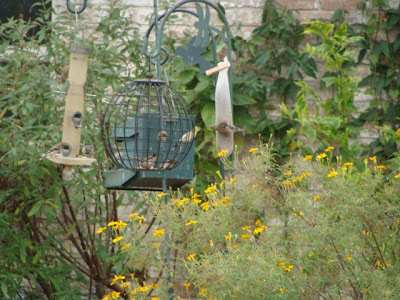 A small confinchent of birds is seen below, resting up from confinchion activities in the Vitex Lounge. Oaks and pine trees are conveniently located nearby for overnight accomodations. 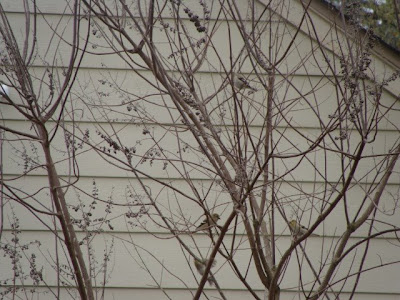 Although there was widespread panic at the appearance in the vicinity of a member of the feline persuasion, and great sadness over the loss of one or more confinchiongoers to his felonious activities, birds are encouraged by the Head Gardener's efforts to deter such activity. They also commend the Head Gardener for her rescue of a finch who strayed from confinchion grounds and found himself in the unfamiliar environs of a back patio. Unable to fly through a door to get to the confinchion center, the stunned bird was given shelter until he recovered his wits and was able to return to the festivities.

As is customary, confinchion attendees have not indicated how long they will remain in the area. The Head Gardener will be restocking the sunflower chip supply later today and has vowed to be more diligent in refilling the feeders. In fact, that's where she's headed right now.
Confinchion goldfinches

growingagardenindavis said…
I'd say those finches are extremely lucky...the ones who couldn't attend and remain in my garden have to make do with one thistle seed feeder and one sunflower chip feeder.
February 2, 2010 at 7:16 PM

EAL said…
I like that round feeder; it is very like the one I am getting. Keeps the squirrels and crows out. You are lucky to have so many birds!
February 2, 2010 at 8:37 PM

Dee Nash said…
That is just amazing how many of them you have. I put up two feeders for them this year in a sheltered spot, and I have quite a few, but not that many. Love that round feeder. Bet it keeps the squirrels out.~~Dee
February 2, 2010 at 8:57 PM