on January 18, 2010
Tomorrow, January 19th, would have been my friend Amy's 58th birthday. Later this week I'll gather up the 100 Ivory Floradale tulip bulbs that have been chilling in my garage refrigerator since October and I'll head over to her garden to plant them in the island bed. The post below is one I wrote after last year's planting session. I miss you, Amy, today and always.

A few years ago, my friend Amy told me that if she were ever to be known for planting a particular flower, one that would appear throughout her garden in masses and drifts and waves, it would be white tulips. Every year in October, she and I would make a trip to Houston's annual Bulb & Plant Mart to peruse the offerings. Amy's first stop would always be the Tulip booth, where she'd purchase 100 Ivory Floradale tulips to plant in her island bed out front. She continued to dream of the day when hundreds of white tulips would grace her spring garden, but until she could make that dream come true, those 100 bulbs sufficed as her signature flower. When she died so suddenly and unexpectedly late last spring, all of us were too broken-hearted to really consider what would become of her garden. But as Bulb Mart's dates approached, I realized that I could continue her tradition of planting white tulips in that island bed and thus honor her dream and her memory. So I bought 100 Ivory Floradales and brought them home to chill in my refrigerator for the requisite 8 weeks. Wednesday afternoon, I loaded FloraBob, my little red truck, with tools, cow manure and the bulbs, then took off for Amy's house. I spent the afternoon clearing the bed of weeds and dead or dying plants, whacking back the Peruvian Pavonia that was overwhelming its small space, and then digging the holes for the tulips. Per fellow garden blogger Elizabeth of Gardening While Intoxicated, I dug one large trench and planted the bulbs close together, almost touching. I topped them with some of the good rich soil that Amy had nurtured in that bed, adding a bit of cow manure to top dress. This is how it all looked when I'd finished. 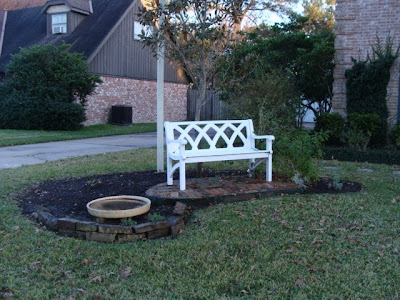 As I rested from my labors and looked around her garden, I contemplated the beds she'd created along the curb, sighing over how much work needed to be done to whip them into shape. But the longer I looked, the more I found to rejoice over and to smile about. Yes, it was neglected and a bit untidy without the loving attention that Amy lavished on it ... but all the hard work she put into her soil and her design enabled many of the plants to not only withstand the neglect but to flourish unaided. Since the next day was Garden Bloggers' Bloom Day, the brainstorm of Carol at May Dreams Gardens, I decided that I'd share not just my blooms this month, but Amy's. I took a walk around her gardens, front and back, and here's a collage of some of what's blooming in her garden. 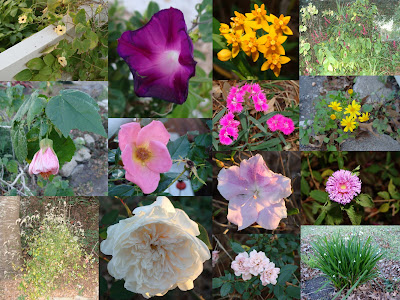 Anonymous said…
Cindy, that post brought tears to my eyes. What a sweet thing you've done; I hope you'll post a photo of those tulips in full bloom. Digging in the dirt is good for the soul, isn't it?
January 19, 2010 at 12:10 AM

beckie said…
Cindy, a lovely way to remember a friend. What a great tribute as well. Being able to do something like this also helps get us through the grieving process. You are a true friend.
January 19, 2010 at 4:46 AM

Mr. McGregor's Daughter said…
This truly is the most meaningful memory garden I've seen. So touching.
January 19, 2010 at 11:07 AM

Dig, Grow, Compost, Blog said…
Cindy, I remember this post from last year and your subsequent post of the beautiful blooming white tulips. Such a loving tribute to your fried. Her family must be grateful for your labors.
January 20, 2010 at 7:53 AM