Sunshine On My Shoulders Makes Me Happy ...

Finally, the sun made more than a brief appearance on my corner of Katy ... it actually lasted the entire day. Clear skies, a light breeze and a high of 62 degrees made for a very pleasant day working in the garden. Fearing reprisals from the yard police, since such is a reality of life in the burbs, I worked on cutting up the piles of debris in the front garden, which included the remains of the Erythrina crista-galli; Duranta and Cassia trimmings; and some very thorny small branches from the Mexican Lime. I stepped on one of those branches as I was working and experienced the exquisite pain of having to remove a 1-1/2 inch thorn after it pierced my foot. A little info for those of you who haven't had a large thorn in your foot (or pins in your toes from foot surgery): it hurts a LOT more coming out than going in. YEOW. (I've been wearing Skechers vinyl clogs in the garden for a while now; I believe it's time to look for footwear with impregnable soles.)

Continuing on, I spent a lot of time living up to the title of OutStanding Gardener here at Wit's End. I stood in one spot and then in another, surveying the north side of the front gardens and reinventing the wheel over and over, i.e. changing my mind several times about what in the heck I do next, design wise. I had to have some drainage work done on the south wall of the house in front last week; my contractor saved the soil from that area and placed it in an empty spot on the north side. He also removed some of the loose bull rock that has been lining the gardens on the north front side. These are good things, in the long term, but right now they make some areas a very sad sight. There are piles of rock (as seen below) to which I kept adding yesterday (more on that in a sec). 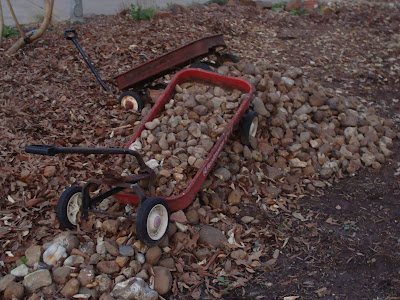 I've told y'all I like to change things up and I do, but I am convinced that now is the time for me to settle on a design for that area of the front gardens, implement it and then stick with it. The reasons I used bull rock as an edging to being with were not only aesthetic but monetary. I'd have preferred moss rock boulders or stacked stones but at the time I did this, the budget couldn't handle the strain. I like the look of the loose rock because it gives a feel of the Texas Hill Country to the gardens. But as an edging material, it leaves a lot to be desired. Not only does soil wash into the rocks during our heavy rains, the rocks settle into the ground over time, lowering the edging. Weeds grow amongst the rocks and removing them is a real pain, as is relocating them when I decide I want to tweak a bed's shape. Since Valentine's Day is coming up next weekend, and the budget can now handle some heavy expenses, I see big rocks in my future.

So I spent some time yesterday shifting rocks around for the umpteenth time ... and probably not the last. I did relocate a few of the larger boulders but mostly I tossed rocks onto one pile or another as I removed them from the edges of several areas. Both the debris shredding and the rock shifting took quite a bit of my time and I'm considering other options for dealing with these. An electric chipper-shredder would free up a lot of time, as would hiring someone to remove the danged rocks. (I may post the rocks on Craigslist first and see whether anyone will take them. That's how I got rid of the sod on the south side, as some of you may remember.)

I ended the day with a sore foot, a twinging knee, aching muscles and a big smile. My day was a welcome taste of the spring that's only a couple of weeks away. Although there had been ominous reports of a freeze headed our way, it's looking like a frost will be the worst that we get. Which reminds me, I read an article recently and learned that the terms frost, freeze and hard freeze are all related to specific temperatures. A frost occurs at 36 and below, a freeze at 32 and below, and a hard freeze at 28 and below. I did not know that!


*I hope the late John Denver would find the altered lyrics humorous. It's one of my favorites of his songs.
rocks

Meadowview Thymes said…
I am almost sore myself reading your post! But loving rocks the way I do..it sounds wonderful.
BTW--John Denver would love your rendition of Sunshine..I am sure of it! :)
February 7, 2010 at 7:25 PM

Gail said…
I know that you are one happy gardenert~Having a bit of sun and working on projects is perfect! I am glad your budget has room for BIG rocks of the limestone variety~Who needs diamonds! gail
February 8, 2010 at 8:28 AM

growingagardenindavis said…
I like the OutStanding Gardener phrase...I think I qualify too! Can't wait to see the new rock...wish I was close enough to take the old off your hands.
February 8, 2010 at 4:06 PM