on April 19, 2010
The garden designer (hereinafter to be referred to as Otahal*) and his crew are scheduled to arrive this afternoon to begin the process of setting boundaries out front for the Head Gardener. In an effort to keep her from continually reimagining the borders and thus the overall layout of those areas, Otahal will work with the HG to establish a permanent layout. I pity the man ... he may have known the HG for years but he has no idea what he's in for! Once the curves of the beds and borders are established to both Otahal's and the HG's content, his crew will begin the labor intensive part of the process.

My job during this venture is to maintain a record of the process. The photographs below show the current layout of my corner of Katy. Starting at the northeast alleyway corner, we're moving west/southwest around the perimeter. 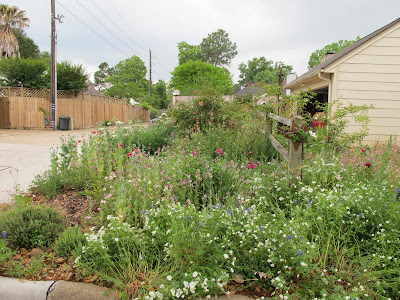 Nothing will change along this area ... I just wanted to include it because the bed is so full and lush with spring flowers right now! 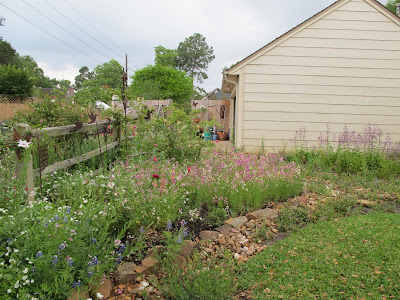 Budget constraints led me to leave semi-triangular part of the rose bed as is where the rocks are concerned. That could change if we have enough leftover rock and Otahal is willing to deal. 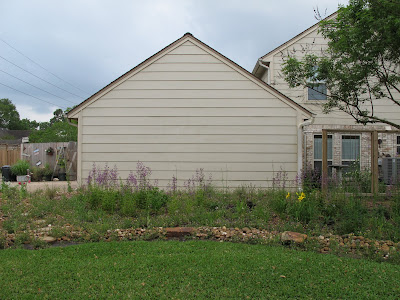 This bed has mostly daylilies, Gulf Coast Penstemon (P. tenuis), purple coneflowers and some Gulf Coast Muhly along the back. The loose rocks will be removed and used in other areas. A double layer of rock will border the bed. 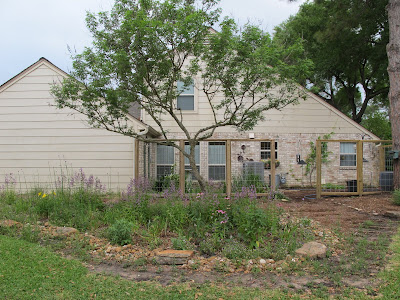 The rock border will wrap around this edge of the bed. I just realized that I haven't shown y'all the other thing the Builder sawed a couple of months ago. If you look at the right hand side of the picture, you'll see that there's a second trellis to match the first one. 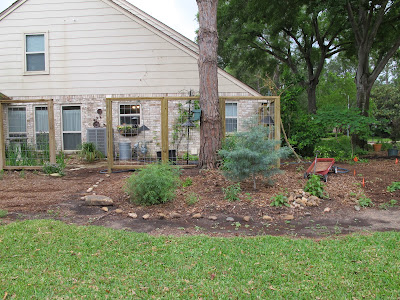 That second trellis is positioned behind the pine tree. If this tree succumbs to pine bark beetles as so many in our subdivision already have,the Carolina Sapphire Arizona Cypress is intended as a replacement. 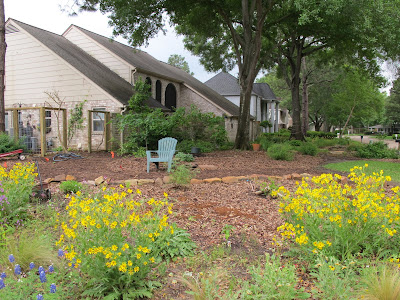 Looking southeast to the area, I know there are a lot of embarrassingly large bare areas. The front gardens were hit hardest by the winter weather. Tina Turner Bauhinia will fill in a lot of that area as she recovers, I hope. The key lime tree was removed after the new growth wilted and died. That this happened right after I removed the dead wood makes me wonder if there's a connection. 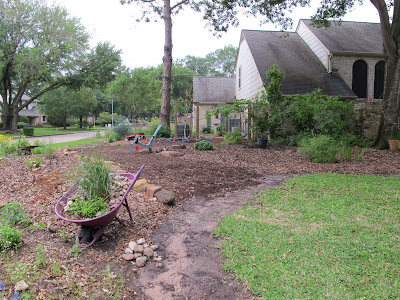 A double rock border will be placed behind the corner bed. 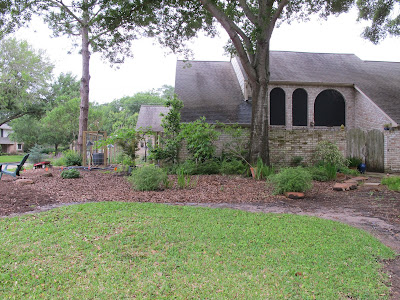 This small area of lawn will be even smaller when all is said and done. The Executive Producer and Chief LawnMower will have an even easier job. 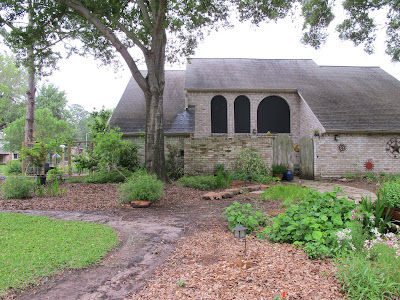 We're going to get a little creative in this area. There will be a double layer of stacked rocks wrapping around the tree. The leaf-mulched area will have the same but the design is something we must work out. 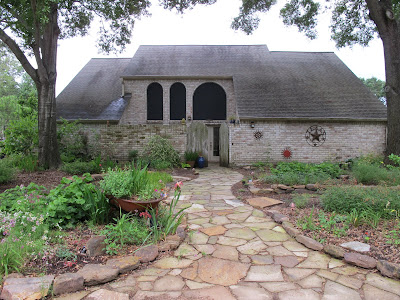 A note re the flagstone sidewalk: I love the look of it BUT ... The subcontractor should have used two inch thick flagstone that did not have thin layers of rock on top. Those layers are breaking as we walk on them. The contractor used a different installer for the sidewalk than he did for the courtyard and back patios. I regret that I didn't wait for Isidro to resolve his immigration issues so he could lay the sidewalk. I offer this information as a caution to those considering flagstone. All flagstone is not created equal ... nor are all stonemasons! 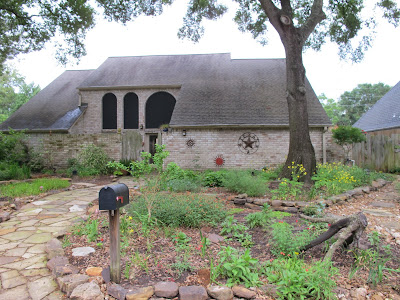 You may remember that it was just last year that I personally placed the rock border around the willow oak tree. All that work will be undone to properly install new borders. Otahal's crew will dig out trenches to a depth of 6 inches, line them with geo-textile fabric and top that with gravel, then place the rocks. It's going to be a messy and arduous process but I'm trusting in them to make it beautiful. 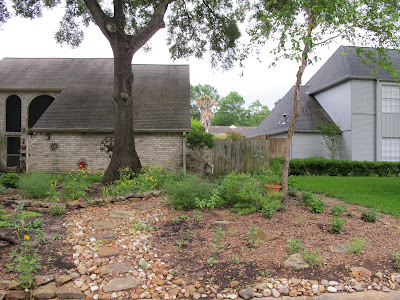 There's another red Bauhinia (B. galpinii) planted under the river birch and she too is making a comeback. I named her Cher ... it seemed appropriate. This bed will remain pretty much the same. The dry stream path may end up being tweaked a bit.

So there you have it. I'm going to do a separate post showing you Phase Two of the process. It's not pretty and it will get uglier, I know. *Before I move on to that, a few words about Otahal. I mentioned in a post a while back that we both attended Hartman Junior High School in southeast Houston and worked in the school library together. He's been growing plants and designing gardens through his business, Old South Gardens, for many years now. I knew he'd understand what it was I was trying to achieve here at Wit's End.
rocks

Kathy said…
You have to do a lot more work to have a durable stone wall in a cold climate, because to prevent heaving you have to dig down below the frost line to build your foundation. That is one thing I envy about warmer climates
April 27, 2010 at 8:41 AM