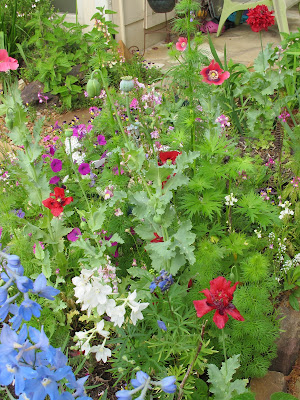 I was reminded of this truth when I walked out into the back garden last week. I'd been careful to keep the seed pods of pink and red poppies separate last year when I was collecting them ... or so I thought. 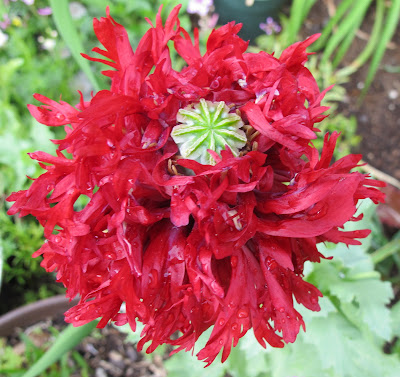 Did a few errant poppy seeds, infinitesimal specks that they are, escape from a pod as I was bagging it? Or did the wind blow them there? Only Mother Nature knows and she's not telling! 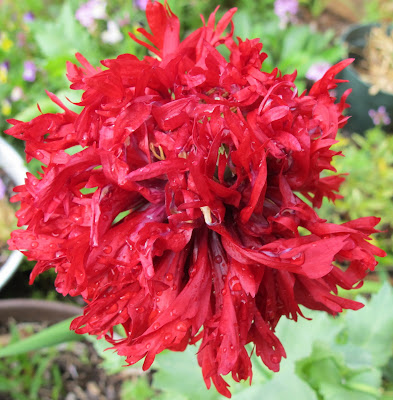 *Based on what I found on Google (Lougle, for those who have seen a certain comedy now playing theaters), the words "Mother Nature always bats last and she always bats a thousand" can be attributed to environmentalist Rob Watson. I heard them from that wild woman of the Wild Wild West, Mary Ann Newcomer.

Meadowview Thymes said…
Maybe it was the wind...or a little bird that meant no harm?
The color of all those flowers together look really good though. I am such a cottage gardener, I love things mixed together.
April 15, 2010 at 6:19 PM

Rose said…
Cindy, I've given up on my original pink and purple garden palette. If Mother Nature wants to add a red bloom or even (gasp) an orange one in the midst, that's fine with me. I've decided that when it comes to flowers, there's no such thing as clashing colors:)
April 15, 2010 at 8:44 PM