Real Estate Activity on My Corner of Katy 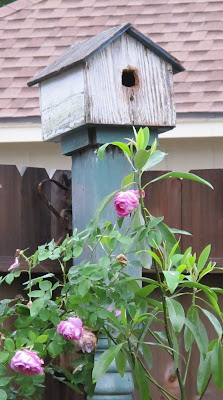 As I sat sipping coffee and mentally girding myself for the day ahead, I watched an ongoing episode of Birdhouse Hunters unfold nearby. Although a starling has a lease on the simple but roomy abode pictured above and has set up housekeeping there, several sparrows remain convinced they can convince that resident to break his lease and abandon his domicile. 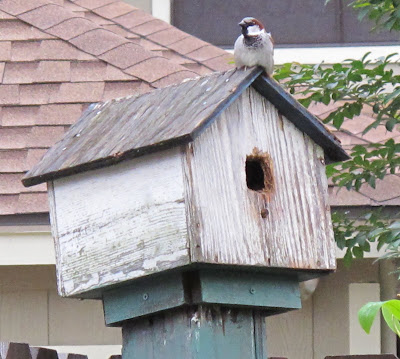 I watched an interesting dispute between two highly motivated prospective tenants. After several moments of intense conversation atop the fence, both flew off the fence and engaged in a mid-air confrontation near the home's entrance. They then returned to the fence for further negotiations, followed by another brief aerial battle. Evidently this fellow was the winner of the dispute. Although he's mustered up the courage to perch on the roof and hail insults at the starling holed up inside, he was not brave enough to attempt entry. 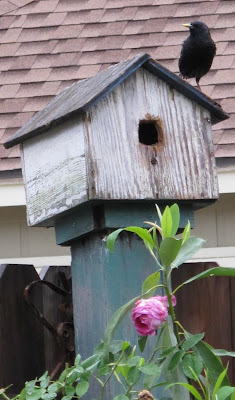 A few seconds later, he flew away and the current tenant emerged to survey his domain. Both Ma and Pa Starling have since been observed coming and going. They may have been newlyweds when they took up residence but they've clearly progressed to active parental status. Although neither starlings nor sparrows are the most desirable of tenants, I'll hold off on serving them with an eviction notice until their brood has fledged.
birdhouse sparrows starlings