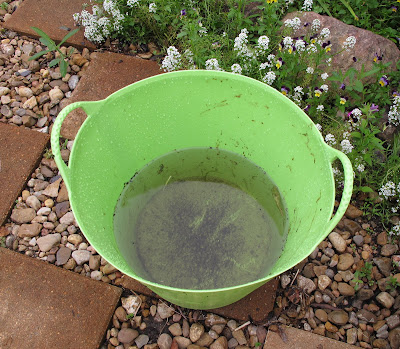 The first and best surprise: RAIN! My tubtrug was empty when the rain started but it was about one-third full at the end of the day. 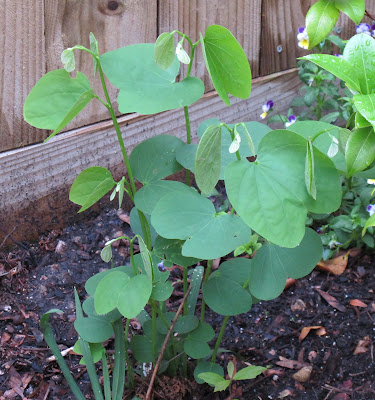 The Bauhinia acuminata planted along the south fence in back showed no signs of life during a cursory search a week ago. There's a lot of oak tassels and leaf mulch in that area and I didn't dig around to see if I could find the root system. I was feeling pessimistic about it but lo and behold, there's new growth! I'm wondering if it will put on enough growth to bloom this year. I hope so because the pure white blooms are such a delight. 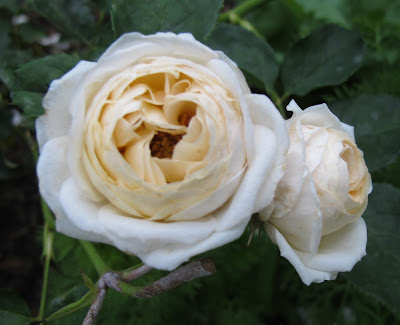 The tag on this David Austin rose may say HERITAGE but I beg to differ. I'm not sure which one it is but I know it's not Heritage. Pretty though it may be, I wanted a pink rose there. Dang it. 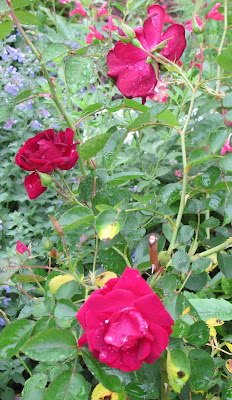 And this red rose is most definitely NOT Cecile Brunner. I know I had Cecile planted there and it's a complete mystery to me how a red rose is blooming instead. 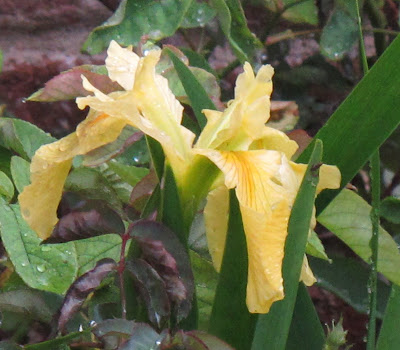 What the heck is that Creole Canary Louisiana Iris doing in an area where no yellow is desired? The Head Gardener will hear from me about this! 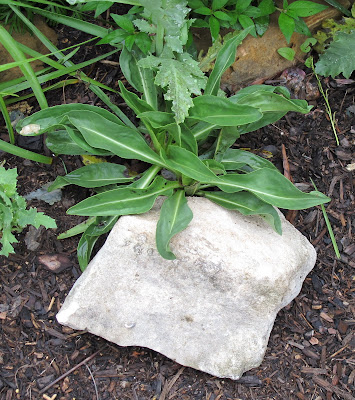 Back to happy surprises ... my friend Debbie called to tell me that they had brought me two rocks from their property in Burnet. When they took some friends out to view the property a couple of years ago, they were quite entertained by my penchant for collecting rocks as we wandered the site. I was able to pick up the smaller one above and carry it into the back but I haven't tried to move the larger one yet. They tell me there are a lot more where these came from ... woo hoo! 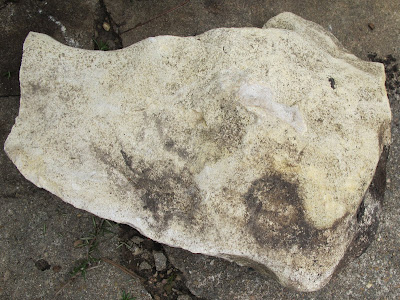 I'm also happy to report that unlike last April's heavy rains, today's storms did not result in flooding inside the house. This was the first opportunity to observe how well the drainage system along the south wall worked during a torrential downpour. It did not disappoint! There was some puddling near the grates due to oak tassel accumulation but no standing water near the wall of the house.

The final surprise of the day: my darling daughter brought home a pint of Toasted Coconut frozen custard from her job at Ritter's. All in all, I think the happy surprises negate the less felicitous ones!
rain

Dig, Grow, Compost, Blog said…
I finally caught up to your posts. Lucky you for getting some rain! I wish we had gotten some. You have so many things going on there. Strange how you got a red rose where you were expecting pink. Same for the white one. I bought one of those Kaliedescope abelias last fall when I was in Houston, so mine's a bit bigger than yours and has more color. But it looks similar. Right now mine's almost orange colored. My verdict is still out on the bush, until I can get a full year on it.
April 19, 2010 at 11:48 AM

Meadowview Thymes said…
Not sure what happened with the roses...how does...well, I'm sure there is a logical explanation, right??
Love the rock! I love all rocks. And ice cream to boot--what a great Sunday!
April 19, 2010 at 12:06 PM

Carol Michel said…
I've noticed a few surprised in my garden, too. I blame the garden fairies. They like to mix things up when your back is turned.
April 19, 2010 at 7:31 PM

beckie said…
Cindy, the head gardener can send that yellow iris to me-it's gorgeous! I think I know how you have a red rose where the Cecile Brunner was. I have a few of those as well, and it happens when the grafted hybird rose dies and the root stock that it was grafted to is all that is left. These root stocks are hardier than the other. It will put on a great show one time in the spring and then nothing the reat of the year. I always hated to pull out a blomming rose and waited til after the blooms were gone. If lefft to live, they will become a mass of very thorny long canes. :(

Cindy, MCOK said…
Jean, I'll be interested to hear your take on the abelia. I've seen them planted out at various nurseries and suspect it will need some attention to keep it looking good.

MT, it was a lovely Sunday.

Beckie, I like the iris and may move it to a more felicitous spot in the fall. You may be right about the rose but I thought it was grown on its own roots. I'll let it finish blooming and then move it.
April 27, 2010 at 5:12 PM