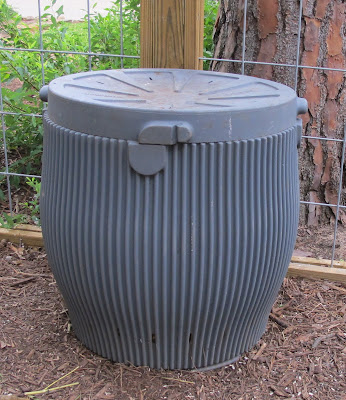 I think of myself as having become a gardener when I moved to this corner of Katy but I started taking the first tentative steps at my old house a few blocks away. My neighbors George and Billie were my first mentors. George tended the vegetable garden, which was bountiful, but it was Billie's flowers which captured my heart and imagination. The first seeds I sowed, Abelmoschus, were given to me by Billie. They also introduced me to composting: behind their garage, George had built a rectangular wooden bin into which they tossed their kitchen scraps and yard waste. I was so taken with that bin that I had George build one for me ... that may have been the first thing he ever built for me. It certainly wasn't the last: the bookshelves to the right of my desk were handcrafted by George in his garage. George was a foreman for one of the homebuilders in this neighborhood and his carpentry skills were superb.

When we moved from that house to this corner of Katy, I brought the compost bin with me. I used it as such for a while but then a visit to my friend Jim's garden encouraged me to try a new system. His bins were simple: cylinders of chicken wire that were wired together. Jim put some together for me and I used those for quite a while. As I read more about composting and got more ambitious, and as I harvested some magnificent compost, I became more adventurous and tried making bins from wooden pallets. I abandoned that method when I dropped a wooden pallet on my foot, thus causing a hematoma that was the most painful thing I've EVER experienced. (The skin on the top of your foot is not intended to stretch that much.) I'd found a picture in the paper of bins made from 1x4s and hardware cloth. Since George had retired from his carpentry and handyman business at that point, I enlisted another contractor to build three new bins for me according to the design plans in the paper.

I used those bins for quite a few years but as the garden grew, it became harder to find a place to put them where they didn't intrude on the view but could be easily reached. Even more significantly, the amount of plant material available for composting was staggering and the time and energy it took to do it was even more so: being of an obsessive-compulsive nature, I spent a lot of time cutting and shredding the material for faster breakdown. I loved the finished product but getting it to that point was becoming ever more exhausting and less rewarding. The bins folded for storage so I put two of them away and only used one. Eventually even that one seemed too cumbersome and tiring to maintain. Storing them was also a problem: they took up a lot of space in the garage. Since by then I'd ordered the bin pictured at top from Gardener's Supply Company, I gave away the big bins on Craigslist. I told myself that I'd continue to compost kitchen scraps and the more manageable remains of spent plants. The bin can only hold so much, after all, and I thought it might be a good way to rein myself in.

Yet over the last couple of years, I still find myself dragging other large containers out to the garden and filling them with clippings and shreddings, all done by hand. I'd fill the 30 gallon plastic pots to within several inches of the top, then add soil and plant into that, usually annuals and herbs. By the time they were ready to be composted themselves, the contents were fairly well cooked. Most of these sat out on the driveway and the biggest issue I had with them was run-off. It was almost painful to watch all that rich compost tea leak out of the pots and run off into the alley. I tried finding a way to capture it, but it couldn't be done.

Since I'd long coveted a compost tumbler, when I found an affordable one at Lowe's a few months back, I was optimistic that this would help conserve my time and energy. Some of you might remember that my brief fling with this composter ended in the breakdown of the frame after only a few weeks. The flaws in the tumbler itself aside, I found that the process of filling the bin was as tedious as any other method, with the same need to cut and shred materials.

The longstanding conversation I've had with myself over the practice of composting became much more heated after that episode. As I've been dealing with the clean-up of spring annuals, I once again find myself questioning whether composting is really something I must continue to do. I know all the arguments for doing it and I truly hate the thought of all that material going into the landfills when it could serve a purpose. I have reluctantly acknowledged, though, that I no longer have the time and energy to compost the way I would like to. It's not an effective use of either resource. My community doesn't have a yard waste recycling program, and a better use of my time and energy might be to work towards establishing one.

I've filled the blue bin one last time, even layering it properly. When that batch of compost is done, so am I.
compost composting

growingagardenindavis said…
I'm on the other side from you...gearing up to building better bins. But I'm also contemplating buying a shredder because you're right...that's a lot of work. Right now I pile and leave it and even though it takes too long it does make great compost with minimal work.
May 13, 2010 at 10:26 AM

Elizabeth Barrow said…
I don't blame you one tiny bit! I have a compost pile but I don't shred or sift or anything like that. And it's still a lot of work! Almost worth it when I harvest the rich black gold, but it takes me a long time to do it. I always feel I earn brownie points every time I mess with it!
May 13, 2010 at 11:39 AM