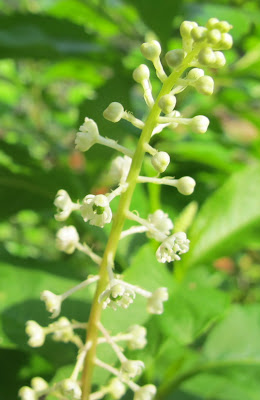 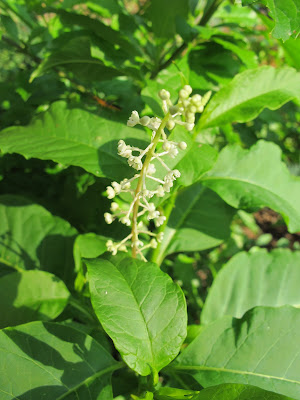 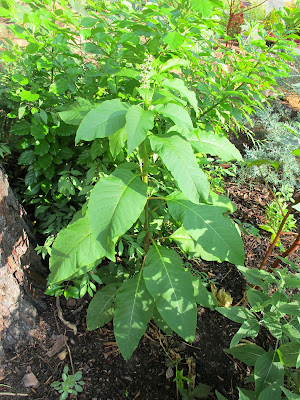 Does anyone know what this plant is? It's growing in the bed underneath the pine tree, which was cleared out and expanded when Otahal's crew was here at the end of April. That means it went from germination to bloom in two months. I suspect it's a weed but it's not one I recognize. I don't want to regret pulling it if it's something special and unusual ... but I don't want to regret not pulling it if it's something noxious and invasive!

Dorothy Borders said…
It appears to be pokeweed. It is considered a weed but I let a couple of clumps grow in my yard just because the birds love its shiny purple-black berries so much.
June 27, 2010 at 8:15 PM

Cypresslily said…
I don't know what it is, I had 3 in a bed that had been completely cleaned, resoiled and mulched. My yardguy said a weed and pulled them.
June 27, 2010 at 9:43 PM

Cindy, MCOK said…
Birdwoman, thank you, that's it! Phytolacca americana. I'll allow this one to grow and see how the birds on my corner of Katy like the berries.

Nicola said…
Hi Cindy, I love your blog. I'm in Southlake by DFW. So I don't get your extreme humidity and heat, just enough to make me want to stay inside and not garden. I've had pokeweed growing last year and the longer you leave it in the ground the longer and bigger the tap root gets.
July 6, 2010 at 2:57 PM