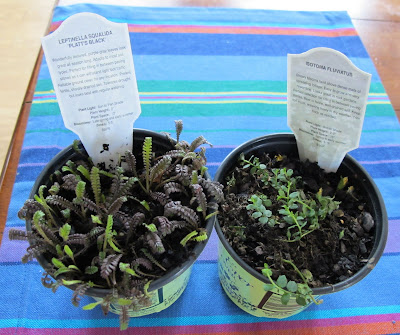 Monday: I pulled some weeds in the corner bed but the sun drove me out before I could make much of a dent. I did manage to spread mulch in the path behind that bed, clean the birdbath and fertilize the Heart of Gold cantaloupe seedlings. They do not appear to have grown much, if at all. I discovered that the Perennial Morning Glory vine (a gift from Otahal) is making excellent progress on climbing the trellis where it's planted. Meanwhile, the nearby Angel Wing Jasmine is working on becoming Pretty Mama once again.

Tuesday: I didn't do a darned thing outside today, I don't think. I might have watered a couple of things. Truth be told, I'd run myself ragged over the previous few days and I needed a day to recover.

Wednesday: I found a bud on one of my Crinums! A big, FAT bud.

Thursday: FloraBob and I made 2 trips to Lowe's for mulch, 10 bags each time. While they were loading the bags the first time, I took a look at the clearance racks. Those were pretty picked over and there were some mighty sad plants in their death throes. I did find two small pots of Forever & Ever Groundcover (TM): Leptinella squalida 'Platt's Black' and Isotoma fluviatus, pictured at top. At 50 cents each, they were worth the gamble! Otahal called to say he and his crew could be here for the day Friday if I wanted them to tackle my remaining projects. Hot damn, did I ever!

Friday: Otahal and crew arrived just after 9 AM and consulting with him took up quite a bit of time. In between sessions, I watered as much as I could and attempted to pack and shop for 2 days away. In the haste of it all, I came away wearing my favorite pair of sandals, which were not suitable for trekking about the countryside or lake. The Executive Producer stopped at Wal-Mart in Brenham and I found a pair of lime green flip-flops that were just what I needed. By 6 pm, we were relaxing under the shade of the covered patio, sipping rum punch and watching our cares slip away.

Saturday: A lazy day ... I sat outside in the morning to sip my coffee and watched a horde of dragonflies dancing over a field. Late in the afternoon, we headed over to Yegua Creek Park on Lake Somerville for some time in the water. (That's pronounced Yeh-wah.) The lake was cool and refreshing and the warmth of the day made it all the more so. Despite my recent lamentations about how many days of awful remain to get through, we were all happily surprised at how much time we were able to spend outside. We lazed about on the covered patio in the mornings and evenings ... as long as we had fans going, we were comfortable. Our pal Jeff even set up a makeshift outdoor movie theater: hang an old white sheet folded in half on the walls of the shed, set up a projector and DVD player, and you're set! We did have some uninvited guests during the movie on Saturday night, when spiders decided to rappel down from the rafters. They were quickly escorted to a more hospitable location.

Sunday: We returned from our weekend getaway this afternoon pleasantly exhausted from our time relaxing. Of course, the first thing I did was go check on the garden. Most of the plants I left behind survived my absence fairly well. The Grand Parade Monarda that I'd planted maybe 2 weeks ago took grievous exception to not being watered daily. I'll be cutting it back and hoping that will reinvigorate the plant.

Looking ahead ... what do I hope the week will bring? That's an easy one to answer: RAIN!

Dig, Grow, Compost, Blog said…
Me too! Sounds like a great week for you. Lounging about a lake also sounds like the thing to take your mind off the weather.
June 22, 2010 at 9:44 PM