And Now Back to Reality ... 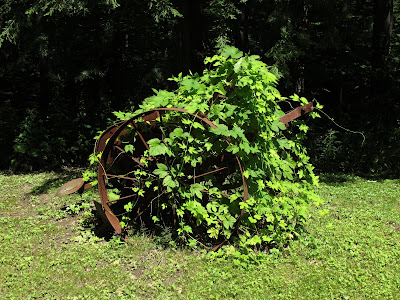 The Head Gardener and I are home, after an extremely bumpy ride from Newark to Houston. We caught up with our flight crew as they made their way through the airport and thanked them for maneuvering us through the turbulence so skillfully. The Head Gardener is a bit of a white-knuckle flyer at such moments ... I, of course, was calm, cool and collected throughout the ordeal ... uh, flight. The co-pilot told me they had to re-route the flight 5 times due to the weather, which wasn't showing up on the radar (hot air evidently isn't trackable). It was dark by the time we made it to my corner of Katy so I have yet to see how the garden fared. The Executive Producer and his assistant assure me that plants were watered and fish were fed. We'll find out in the morning!
Buffa10

Dig, Grow, Compost, Blog said…
Glad you made it back safely. I had a bit of a bumpy flight as well and got stuck in Atlanta because of rain. I enjoyed seeing all your photos. It's like being there all over again. :-)
July 13, 2010 at 10:03 PM

Gail said…
Cindy, I am still laughing from the count down to the end of awful days widget! It was such fun to spend time with you~I'll let you know when I visit Austin to see if you can pop up there! Glad you eventful flight got you home safely! xxgail
July 14, 2010 at 7:20 AM