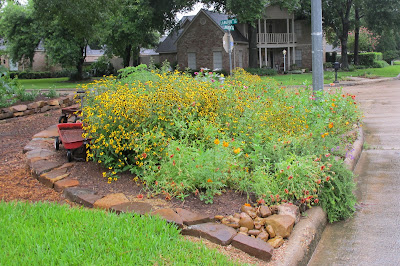 While out taking pictures in the rain on Friday, the HG and I were both appalled to see just how weedy the corner bed had become. It may not be apparent in the picture above, or in the two below. But keep going ... we're saving the ugly truth for last! 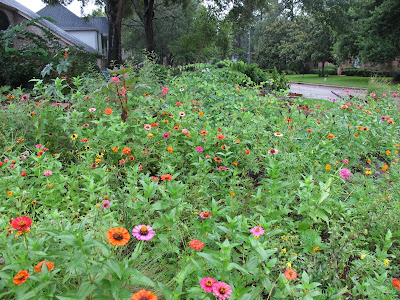 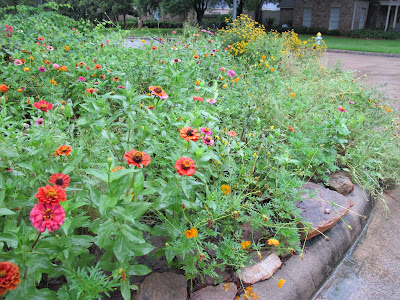 Go ahead and double-click to enlarge the picture ... but don't say we didn't warn you! 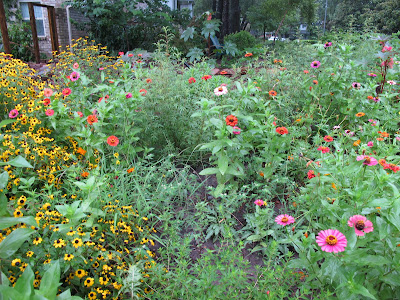 Spurge, Dallas grass, Purslane and a compound-leafed weed whose name escapes me are the banes of our summer in this particular bed. We spent a less than pleasant but productive 2 hours out there this morning, pulling not only weeds but some overgrown Gaillardias that were smothering less vigorous plants. The HG discovered that a Texas Betony (Stachys coccinea) has once again fallen victim to an unhappy combination of rain, heat and sowbugs. She had to be restrained with difficulty from tossing sowbugs into the street to be crushed by oncoming cars while she danced in victory. (Or maybe that was me ...)
corner bed weeds

Rose said…
It's amazing what a little rain can do for the weeds! I've been fighting a constant battle with them here all summer. This corner bed looks gorgeous, Cindy, and I certainly didn't notice any weeds. Love all the coneflowers in the back yard! Your garden must be loving all the rain you've been getting.
July 5, 2010 at 8:41 AM