Three for Thursday: Stalwarts of the Summer Garden

on August 19, 2010
I walked outside this morning to see what might make a good subject for this week's Three for Thursday post.  As you might be aware from all my whining and whining and bitching and moaning about the weather, there are a lot of plants out there that aren't handling summer very well.  Thankfully, there are also some plants that seem to positively thrive on excessive heat and lack of rain.  So I chose three of those to feature in today's post. 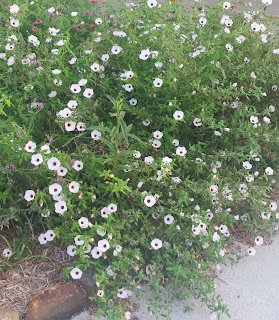 I don't believe I've ever seen Peruvian Pavonia (P. peruviensis) wilt, even when it's had little to no water and  the temperature soars over 100 as it has recently.  It's covered in these pale pink blooms with deep maroon throats and red stamens.  It blooms profusely in sun but will also bloom in partial shade.  I'm not going to lie to you: I'm not wild about this plant: the  Head Gardener's says I'm a plant snob.  She says I don't like it because it presents no challenge to me as a gardener: it's easy peasy lemon squeezy to grow.  She also alludes to my complaints about its tendency to reseed freely, and for those seedlings to grow all to quickly into a veritable thicket as they did in the rose bed.  Well, pfui, she's right: the plant has certainly proven its worth to me this summer.  I will do my best to think more kindly of it in the future since as my late friend Amy used to say about plants that could take our most brutal weather, "it's so brave".  A note re the botanical and common names: I've also heard this plant this referred to as P. hastata, Spearleaf Pavonia and Brazilian Pavonia. 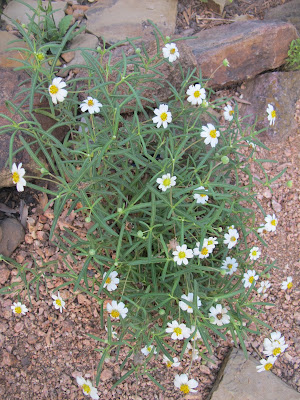 Blackfoot Daisy (Melampodium leucanthum) is one of my favorite Texas natives.  This one requires full sun, lean and mean soil, and very little water.  In fact, I've had plants die back from an excess of rain after one of those drenching torrential storms.  I don't water these plants at all and they reward me with a profusion of small white daisies for months on end.  They also reseed, but not thuggishly.  This one is actually growing in a crack between the moss rocks of the border along one of the granite paths. 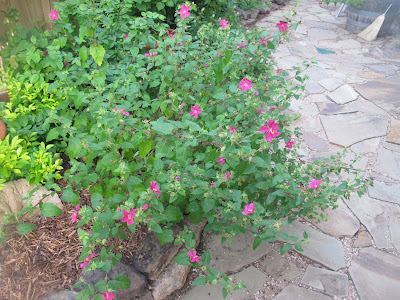 Rock Rose (Pavonia lasiopetala) is a little more mannerly in its reseeding habits than its relative.   I've seen some catalogs and articles where this plant is classified as a shade plant (partial or dappled).  Here at Wit's End, it blooms and grows its best in full sun.  I do have some plants that get a fair amount of shade; those plants don't bloom as profusely.  This one has wilted a bit in the afternoons recently and I've noticed that it needs supplemental watering to keep the foliage a healthy dark green.  I love the hibiscus-like blooms on this one, which is why some refer to it as Rose Mallow.

I hope you'll join me in posting Three for Thursday, if not this week, then next!  Pick 3 pictures of plants from your garden ... tell us about 3 books you've read that you want to share ... rant about 3 things that bug the heck out of you ... show us 3 pieces of garden art or 3 photos of egregious crimes against gardening ... shoot, get creative!  Make it fun for yourself and it will be fun for us!
Melampodium Pavonia

Mr. McGregor's Daughter said…
The head gardener is right, don't be such a plant snob. Peruvian Pavonia isn't easy to grow here in Zone 5. Just think on that when the temperature soars. The Rock Rose sure is pretty. My post is up too.
August 19, 2010 at 11:19 AM

Gail said…
Hi Cindy, Trying to figure out which plants will survive the strange weather is the hardest thing these days so I am now gladly planting what will take what ever nature throws at it! My post is up! gail
August 19, 2010 at 12:04 PM

Carol Michel said…
You gotta like a plant that survives those hot Houston summers! Otherwise, what would you and the Head Gardener do to keep from going mad in the heat?

Kathy said…
Never heard of pavonia. Grew the melampodium but it didn't really thrive for me. Probably not hot enough!
August 19, 2010 at 6:01 PM

Rose said…
Great choices, Cindy--the Rock Rose is especially pretty! I see that your idea is catching on with several Three for Thursday postings--I'll try to join in one of these weeks!
August 19, 2010 at 10:21 PM

Anonymous said…
The three plants that you chose are doing really well. I like small, delicate flowers and I bet that helps them weather the heat. The rock rose is a pretty plant. Give these guys credit, they tolerate heat.
August 19, 2010 at 11:15 PM

Meadowview Thymes said…
Love, love black foot daisies. They do so well in my hot and dry yard. I don't think they re-seed very well in my yard though. Wish they would--they are kind of expensive, but I plan on replacing every year. Too good of a summer plant to pass up!
August 20, 2010 at 10:19 AM

Commonweeder said…
What a great post. I am sending it right on to my daughter, who lives not far from Katy, so she will see there are plants other than Star jasmine that will thrive in her climate and soil.
August 20, 2010 at 10:46 AM

Elizabeth Barrow said…
I like that Peruvian pavonia! I have the "regular" one - the rock rose pavonia. It does very well here too at my house.

Turnera does well in my garden and so does celosia.

Meems said…
Hey Cindy,
How nice to have a plant you can declare "I don't believe I've ever seen Peruvian Pavonia wilt, even when it's had little to no water and the temperature soars over 100"! That's enough to make you love it with a summer like this one.

Unknown said…
I cut my Pavonia back to 6 inches tall in early spring. They tend to grow back with better form and are much thicker with more blooms. They can get real leggy if not cut back.