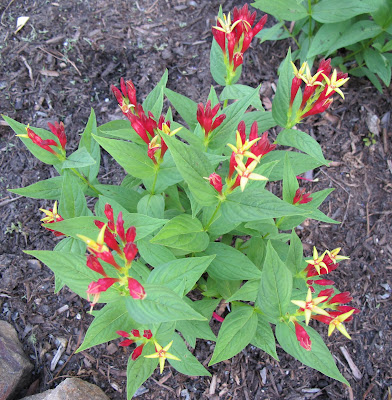 Spigelia marilandica is one of my favorite wildflowers and it's taken me several tries to grow it successfully.  I've lost them twice before ... or have I?  When I bought 2 one gallon pots of this charming native from Enchanted Gardens (I think in fall of 2009 ... despite having a garden journal, I can't see any record of when), I left them in their pots and set them on the north patio near my kitchen door so I could keep an eye on how they were doing.  They produced a couple of  blooms and then began to decline.  I feared the worst but allowed them to remain where they were, even as they dwindled to dry brown nubbins.  Within a week or two, I began to find new growth emerging from those nubbins.   It was an excellent lesson for me in the behavior of perennial plants.  You would think that as long as I've been gardening, I'd have a fair amount of experience in that area.  Thanks to almost 15 years of warm winters, though, most of my perennials never went through the cycles of death and rebirth that nature intends for them.

Also known as Woodland Pinkroot, these plants need a fair amount of moisture, so I placed it in the rain garden I made last year.  As you might gather from the common name, this plant can be found in shady spots in the wild, although the Lady Bird Johnson Wildflower Center's information on its native habitat mentions open woodlands and woodland edges.  Here on my corner of Katy, it's been getting a fair amount of sun this summer.   As you can see from the picture below, by the end of August it's nowhere near the beauty that it was in spring.  Even though I know its shabby appearance right now is due to its going dormant, I plan to move it to a spot where the sun is a bit less intense and I don't have to do as much supplemental watering. 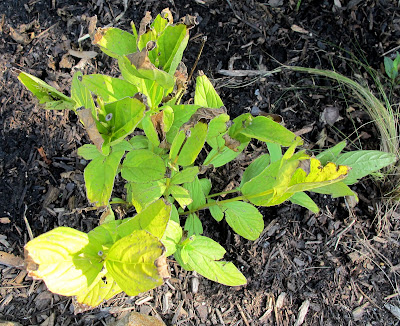 I did collect seeds when the plants finished blooming and scattered them in an area where I think Indian Pink would grow well. I'm hoping in years to come I'll have more instances of the beauty below in my garden! 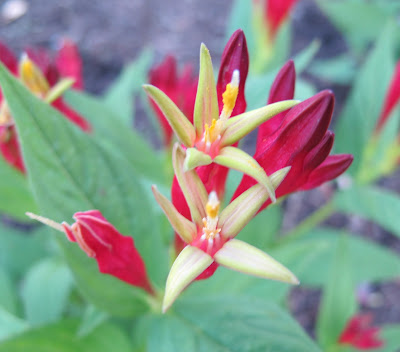 Elizabeth Barrow said…
Thanks for posting the spring and August pictures together. I think this is important -- we all need to be reminded sometimes that there's a cycle of life. For me, it's okay if a plant has some "downtime." For many gardeners, sadly, it's not.
August 26, 2010 at 9:20 AM

Cindy, MCOK said…
Elizabeth, I'm still learning how to manage plants' downtime. The rewards are so worth it, though!

Gail said…
Goodness how did I miss this beautiful WW post! I love spigelia. Have seen it growing wild in the parks and that gives me hope i can keep it alive! Gail
August 27, 2010 at 9:58 PM