The Day After The Day Before: Wild Extremes

on October 22, 2010
Awakened by the sounds of heavy equipment, I walked outside this morning and was greeted by several less than lovely vignettes. 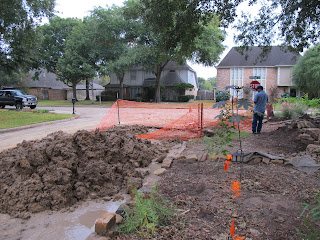 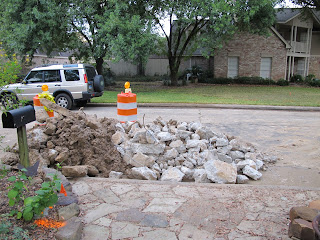 There was a large pile of wet, sticky, clay soil along the curb on the north side of the garden.

The rubble from the various digging efforts was not quite artfully arranged at the end of the sidewalk. 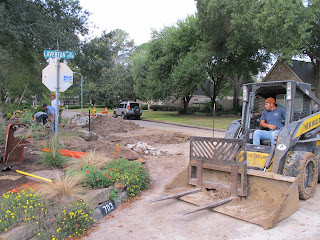 A backhoe operator was preparing to wreak yet more havoc.  There was more wet and sticky clay soil to remove.  On Thursday afternoon, they were quite certain they'd found the source of the leak.  By Thursday evening, it was evident they were wrong. 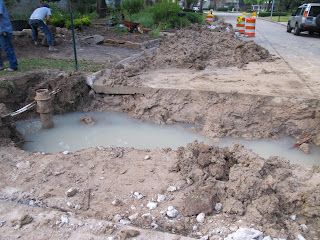 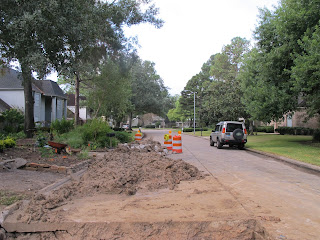 So the workers quickly went about the process of filling in the hole and cleaning up the mess on MY side of the street.  Clean builder's sand was shoveled in and thoroughly compacted.  They set forms, laid rebar and then brought in the cement mixer. 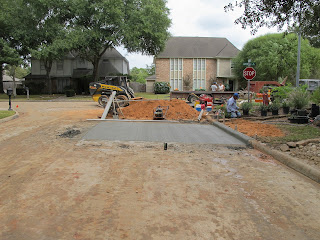 The crew poured and smoothed the cement mixture in what seemed like a matter of minutes. 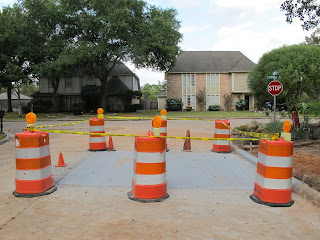 At the end of the day, this was all that remained of the presence of 5 or 6 pieces of heavy equipment and 10-12 workers.  But we won't be lonesome for them for long: since they're now certain the leak is on the other side of my street, they'll return on Monday to start the process all over again! 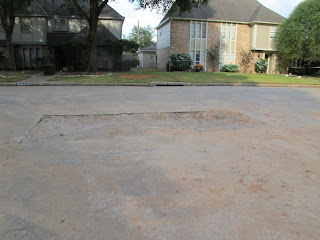 One would think that the presence of this large pothole/sinkhole in the street would have indicated that something is drastically wrong on that side of the street and caused them to dig on that side first.  Hmmppph. 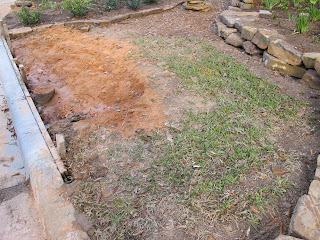 And since I know y'all are wondering just how this affected the garden, here's how things look post depredations.  I won't pretend that I'm crying for that little patch of lawn out front.  I may even replace it with some other sort of groundcover. 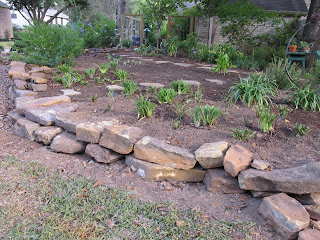 I was not happy with the rebuilding of the rock border, however.   Those rocks are NOT properly stacked, despite the multiple assurances by multiple crew members that they would put it all back just as it was.  I made sure the foremen knew that I was not happy with these results and that I would want them to redo the rocks on Monday.

Since the crews have done the best they could, given the circumstances, to limit the disruptions to the garden, I did my best to be pleasant about any dissatisfaction on my part.I'm not looking forward to Monday, though!
MCUD water leaks

Gail said…
Cindy, It's almost funny or would be if it wasn't in front of your garden. Hopefully they can make it right on Monday. gail
October 23, 2010 at 7:15 PM

LindaCTG said…
Oh, I'm so sorry you're going through this. I feared they had totally messed up your front garden. We go through this every few years when there is so latest street project. The damage takes forever to repair. I'm hoping all goes well with you.
October 23, 2010 at 7:29 PM

RBell said…
What an incredible horror story to have to live through. Best wishes towards the recovery.
October 23, 2010 at 7:36 PM

David said…
Wow! The pictures tell the whole story....so painful to imagine. It reminds me of the horror I felt when there was talk of putting a sidewalk down our street. I envisioned the only sunny part of my garden destroyed forever. Fortunately, it was only a rumor. As they say, time heals all wounds. Hang in there.
David :-)
October 24, 2010 at 2:54 PM

Elizabeth Barrow said…
You're being awfully brave about alla this, but it really does look like they just tossed the rocks in a line instead of building a wall. I hope you (nicely) give 'em hell tomorrow!
October 24, 2010 at 8:34 PM

Cindy, MCOK said…
Thanks, y'all, it's great to have the support of fellow gardeners! I printed one of the pictures I took of the wall back in April just after it was finished. I'll be out there with picture in hand, directing the crew on how to put it together properly.
October 24, 2010 at 8:56 PM

One said…
This looks like a painful experience that hasn't ended yet. Hope your rocks get back in order soon. Meanwhile, take deep breaths. :)
October 24, 2010 at 11:18 PM

Anonymous said…
What a shame. I hope they come through and do the repairs. Mainly for your peace of mind and sanity. I would be going crazy about now.
October 25, 2010 at 12:35 PM

Dee @ Red Dirt Ramblings said…
Egad! That's a bummer. You know, it is so frustrating to be a gardener sometimes, but you have a great attitude about this.~~Dee
October 25, 2010 at 2:08 PM

Mr. McGregor's Daughter said…
Who is responsible for deciding to dig on the wrong side of the street? Too bad all that water couldn't have somehow made its way into the dry garden.
October 25, 2010 at 2:59 PM

Morning Glories in Round Rock said…
What a nightmare! I have a feeling you will be inspired to start another project because of this.
October 25, 2010 at 9:09 PM

Dig, Grow, Compost, Blog said…
Geez, what a horror. I'd be tempted to have your own crew fix the rocks since I'm sure the street guys will have a hard time doing it properly. Hopefully your photo will help. Ugh, so sorry.
October 26, 2010 at 1:18 PM