on July 04, 2011
It would seem that my muse reached her breaking point just after June's bloom day post ... I'm not sure if she deserted me for cooler climes or if she absconded to Pat O'Brien's while the Executive Producer and I were in the Big Easy for a weekend.

I resisted increasingly pointed and acerbic suggestions by the Head Gardener that she take over posting in my muse's absence, feeling certain that said muse would eventually return with a scathingly brilliant idea and inspire me to new heights of prose.   Lloyd knows my heat and drought addled brain isn't up to the task without her ... oh, I've had numerous ideas but I just can't seem to find the energy to execute them.

It's also hard to type when your hand is fused to the end of a garden hose.  While my corner of Katy did get almost 5 hours of steady rain on June 22nd, and the 2 inches of rain did benefit both gardeners and gardens, like most of the state of Texas, the greater Houston area remains in a state of exceptional drought (the highest level).  Until that rainfall, the city of Houston had recorded a record-setting 148 days without at least a half-inch of rain falling on a single day.

To add insult to injury, we've experienced record-breaking heat as well and last month was the warmest June in Houston's history since 1906.  Even some of our most heat-hardy and drought-tolerant plants are showing signs of stress, so it's no wonder that the Head Gardener and I are feeling more than a little stressed ourselves.  Once we come inside for the day, cool down and clean up, we do not venture forth to the garden again until late evening, if then.

So if I continue to be remiss in posting or if my posts are limited to a few brief words and a picture or two, bear with me.  Right now all that's keeping me going is the knowledge that in 16 days, I'll be winging my way towards Seattle and the 2011 Garden Bloggers' Fling.

Dig, Grow, Compost, Blog said…
Amen sister! Hard to be inspired. I don't even want to tell you which of the many plants I planted in the last year have died. But relief will be here soon. What's this about a Pimm's Cup? That's my favorite New Orleans drink but it could become my favorite Seattle drink!
July 4, 2011 at 4:53 PM

Alison said…
Well, it probably won't be raining when you all get here, cause we are just entering our dry season. But it will certainly be cooler than Houston! Today it just hit the 80s for probably the first time this year, and that feels hot!

Andrea Fox said…
i hear ya sister. at this point i feel like i need watering as much as the garden does. if it does rain while we're in seattle, let's see if we can't bring some of it back with us.
July 5, 2011 at 10:44 AM

Gail, it's hard to convey just how bad it is. Any areas I water dry out within hours.

Jean, I hope the rain I see on the radar graced your garden. I'm looking forward to lifting a glass with you!

Alison, I just hope I don't bring a heat wave with me to Seattle as I did to Buffalo last year!

Mr. McGregor's Daughter said…
I'm so ready to escape to Seattle too. While I hate to leave the garden in spring, I have no such qualms about it in July.
July 5, 2011 at 7:40 PM 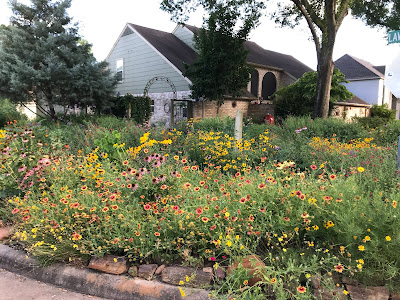 It seems that I have a gaillardia situation on my corner of Katy. When a thicket of seedlings first began to appear in the front beds inFebruary and March, I decided to thin them later in the interest of suppressing weeds.  Friends and fellow gardeners, you most surely know without my having to tell you that thin them I did not.

The plants had been doing so well that I couldn't bring myself to start yanking them even though I knew they were overwhelming other plants. I finally made a start on that today but rain drove me inside before I could really get going. We're told to expect more rain tomorrow and Tuesday so this task may have to wait until July. The Head Gardener and I are packing our bags and heading across the pond to tour a sampling of the gardens in Yorkshire, England.  Cheerio pip pip, the old girls can't wait!

Garden Bloggers Bloom Day is brought to you by  the fertile mind of Carol Michel, who blogs at May  Dreams Gardens and offers a list of other gardeners  who …