A Shadow of His Former Self 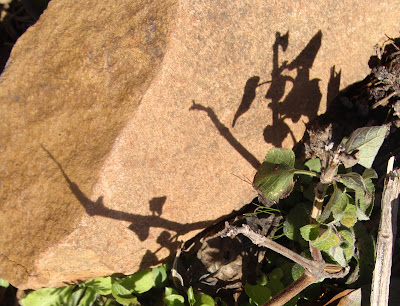 The blizzard of December 4th, 2009 had reduced the lavender form of Salvia 'Anthony Parker' to dry brown sticks atop a tiny clump of foliage. So I was shocked to find that it was not only still alive after the early January cold spell but that the foliage and stems still had some healthy green to them. I took a picture for my records ... when I uploaded the picture, I discovered these cool shadows on the rock beside the plant. They're very other worldly: the one on the right looks like some sort of alien to me. (It reminds me that I still haven't seen AVATAR and really need to do so!)
Anthony Parker Salvia