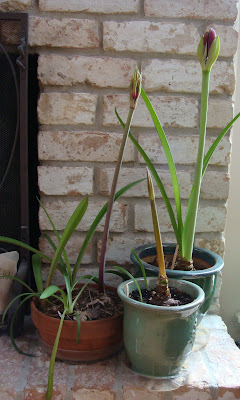 Three of last year's Amaryllis bulbs are preparing themselves to bloom again and their timing couldn't be better. After several days of mild temperatures and even some sunshine (you knew there was a reason you hadn't heard me whining lately!), winter will soon be returning to my corner of Katy. The forecast calls for a low of 32 on Tuesday and Wednesday nights and there's even a possibility of snow on Tuesday. I don't believe I'll be outside much this week! I'm optimistic that this will be winter's last hurrah in the greater Houston area. Whether that optimism will be justified, we shall see.

At least I can be certain of these Amaryllis. In the clay pot on the left, one of the Cybister varieties, is unfurling its starburst blooms. I believe this is Chico but I won't know for sure until it blooms. To be honest, I'd forgotten it was in there! I'd planted a Neon Rose Amaryllis in that pot last spring, intending it to be temporary. I set it outside on my dining room patio, protected from the afternoon sun, and then brought it inside back in December when we had that early freeze. When I saw a bloom stalk emerging I expected it to be Neon Rose. Once the stalk began to open, though, it was obvious from the bloom form that it wasn't Neon Rose and realized there was another bulb in there! Since I'm partial to the more fanciful forms of the Cybisters, I'm excited that this one has chosen to rebloom. 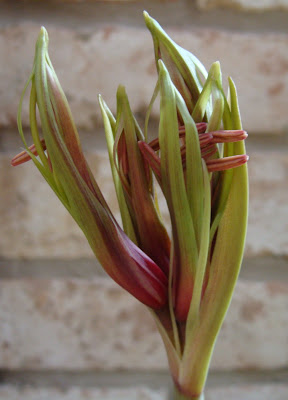 I'm even more excited that La Paz has a bloom stalk. I'd heard from a friend that an amaryllis expert she knows finds it difficult to get La Paz to rebloom after the first year. I wonder what I did that persuaded it to do so? Oddly, it's accompanied by only 2 small thin leaves off to one side. I'm wondering if the bulb has produced offsets and those leaves are the product of the offsets. 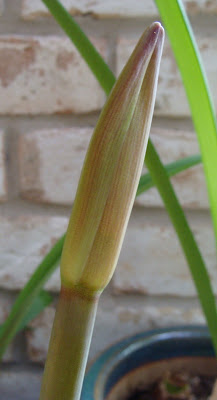 Then there's big, bold, beautiful Red Pearl, whose leaves are such a dark and velvety red that no picture can do them justice. 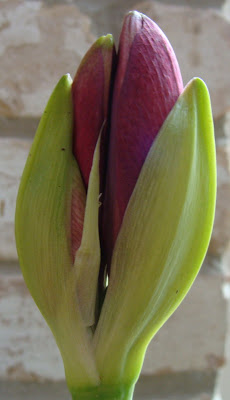 Shoot, I'm wishing now I'd bought just a few more Amaryllis bulbs this year. I still have a few surfaces available where I could put pots! It's probably just as well that I didn't ... I have a lot of plant buying to do for outside and I hope the weather will allow me to do it SOON!
Amaryllis

Gail said…
I do like the Cybisters and remember you had some exciting looking ones last year...How did I forget to order them;) gail
February 22, 2010 at 3:29 PM

Cindy, MCOK said…
DGG, it is indeed a delight.

Gail, let's remind each other in November or so that we need to order some!