What I Did In The Garden Today 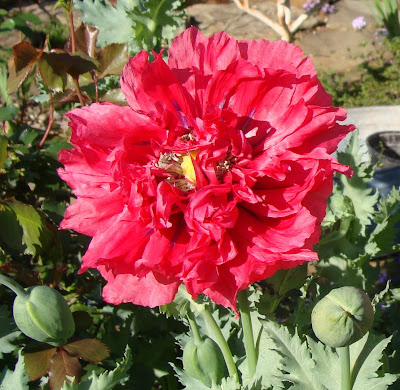 I walked outside this morning to find the first of the poppies blooming. Isn't it a beauty? For the next few weeks I should see more and more of these lovelies on my corner of Katy, although not in such numbers that I fall asleep amongst them like Dorothy Gale of Kansas!

I spent the rest of the day working in the back gardens, which is why this will be but a brief post. I planted all 8 of the Southern Wax Myrtles (Myrica cerifera), which required wrestling first with a pink Turk's Cap (Malvaviscus arboreus 'Pam's Pink') that had to be dug and then with the remains of the Coral Woody Pentas (Rondeletia leucophylla). I'm so bummed that the Rondeletias didn't make it. I thought they'd be able to return from the roots but they show no signs of doing so. I have one plant left in the ground and I may not dig it for another month just in case. (Plus they have a very tenacious root system and even the idea of digging another one out pains me.) I had to move my Erathemum, too, but its root system was much less contrary.

I also planted the Mexican Plum (Prunus mexicana) tree I bought at Discount Trees and Shrubs outside Brenham; the three Rainbow Sunrise New Zealand Flax (Phormium); and a Banana Shrub (Michelia, can't remember which species) which has been patiently waiting in its pot since November.

I'm seriously considering cutting the Persian Vitex to the ground and allowing it to come back from the roots. There's very little green wood to be found on it anywhere except the bottom portion of the trunk. Good news, though: the Mexican Lime/Key lime tree out front has new growth! There's a lot of dead wood to prune but I'm hoping to get to that tomorrow. And just as I was about to abandon all hope of the Angel Wing Jasmine's returning, I spotted a tiny green leaf bud at the very base of the plant! This calls for a celebration so if you'll excuse me, I'm going to pour myself a glass of vino and sit for a spell outside. Tomorrow I'll be back at it again!
poppies