In Case You're Wondering ... 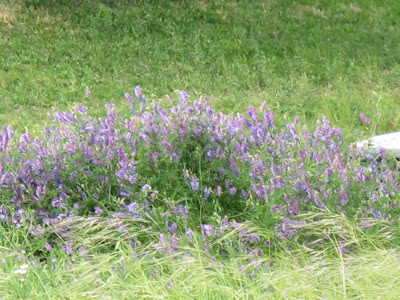 What the huge expanses of purple blooms are along I-10 between 610 and downtown, I have the answer. As I headed to work at the Chronicle this morning, I had a wee bit of trouble staying in my lane on that stretch of the freeway, thanks to those plants!

When I posed the question to garden editor Kathy Huber, her first thought was Vetch. The Vetch I've seen out here in Katy, though, is a very low-growing ground cover with inconspicuous flowers. So I told her I thought not and remarked that it looked more like a purple version of the Red Prairie Clover I've seen blooming recently. Kathy did a little research and determined that TxDOT (the Texas Department of Transportation) had indeed seeded Purple Prairie Clover on some highways.

I had my camera with me today so I stopped on the way home and found a safe spot to take some pictures. From the parking lot where I took the picture at top, it was still a little hard to determine what it was. Once I got a closer view, though, it was clear that I had dismissed Kathy's ID too quickly: it was indeed Vetch! While I don't see that on the list of wildflowers planted by TxDOT, it certainly looked like an organized planting effort. I see that Vetch is used for erosion control and that would make sense, since this was on the sloped banks of the freeway. 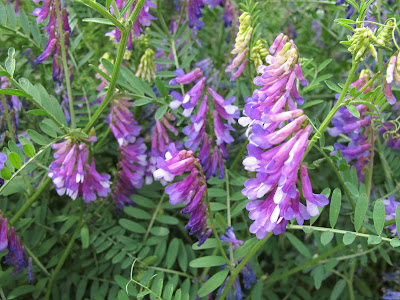 As lovely as it is, this is not a plant for home gardeners: everything I've read suggests that it's invasive in such a situation. So I'll continue to enjoy it at 65 mph (sometimes 70-75, very occasionally 80).
vetch wildflowers