What DID I Do Today?

on April 06, 2010
Yes, I was in the garden most of the day. but what on earth did I really do out there? Looking around at the end of the day, it sure doesn't seem like much has changed. It's hard for a gardener to feel a sense of accomplishment when there are no big things at which to point and say, "There! That's done!" I have to remind myself that what I think of as puttering is as productive in small ways as the heavy duty chores. For instance, I dug Spiderwort out of several areas near the pond. I'm still working to eradicate seedlings from last year's blooms since all too soon, this year's blooms will start dropping seed. I'm going to keep on top of deadheading them as much as I can but I know from experience there's only so much I can do. Like the Head Gardener, some of you may ask why I keep them around if they're so high maintenance. It's hard to resist them when they're blooming, especially this deep blue variety pictured below and the Zapp Hall Orchid I've shown before. 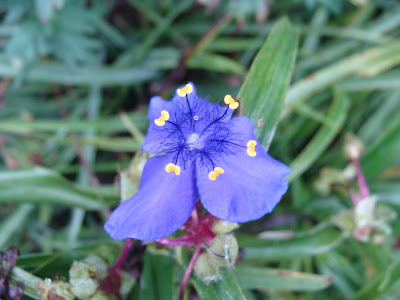 Y'all know that Toadflax (Linaria maroccana) is my favorite spring annual but did you know that Gulf Coast Penstemon is my favorite spring perennial? There are seedlings in the paths in back, so I spent some time transplanting them from path to beds. I don't believe it's possible to have too many GCPs. The buds are just starting to open on them and I'm looking forward to seeing them in full bloom. You'll have to wait till then for pictures.

As I pulled a few weeds in the rose bed in the side yard, I rejoiced to see that the Scarlet Flax (Linum grandiflorum) is blooming. I scattered seeds for these a few months ago and wasn't sure how they'd do in that area. I had them in the corner bed out front a few years ago but they didn't reseed there that I could tell. Maybe I disturbed the soil where they were planted? Entirely possible. (HIGHLY LIKELY, says the HG.) In any case, I plan to order more of these from Wildseed Farms next fall. 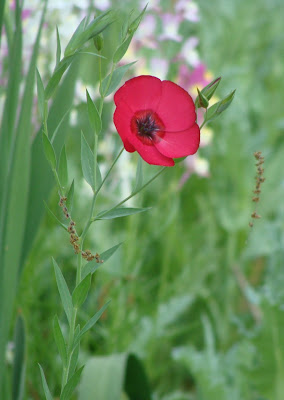 Reve D'Or is really putting on a show this spring. I don't know if that's due to the cold weather, my having pruned it more thoroughly than in the past, or a combination thereof. I grew this rose from a cutting I received at a Texas Rose Rustlers' cutting exchange. 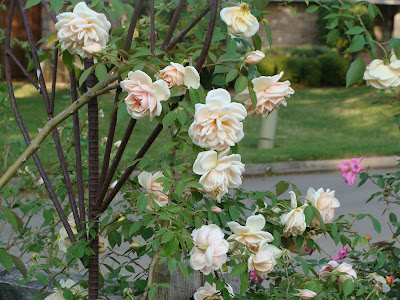 I also discovered a new bloomer in the corner bed. The Chocolate Daisy (Berlandiera lyrata) has its first bloom. I cut back the foliage on these perennials in January, I think it was. They put on new growth as winter wound down and are now lush and healthy. I mulched these plants with bull rock last year after planting them and I'm convinced that's been key to growing them successfully. My previous attempts have ended in abysmal failure. 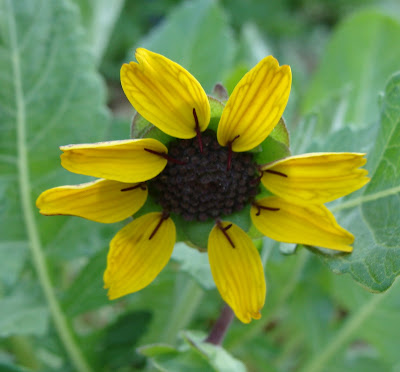 The HG just not so gently pointed out that I was talking about what I DID today, not about what's blooming. I'm ignoring her ... looking at blooms was part of what I did. Which reminds, me, here's a picture of an Engelmann's Daisy (Engelmannia peristenia) that I think has been affected by a virus. I've had purple coneflowers (Echinacea) and Coreopsis both produce distorted bloom stalks like the one on this plant. I believe someone told me that Linda Gay at Mercer Arboretum had ID'ed the problem as a virus. I should send the picture to her and ask what it is specifically. Note the flattened stalk in the picture below. 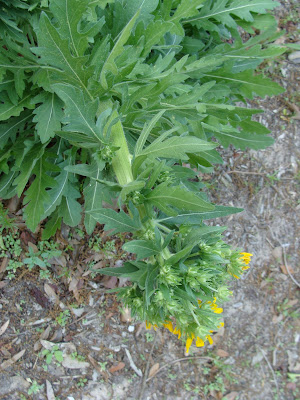 This is a picture of the bloom, which should have individual buds, not this tight cluster of blooms. I should have gotten a shot of it from the side: like the coneflowers and coreopsis, the bloom almost looks like that of a cockscomb-type Celosia. It's very bizarre. If you see something like this on one of your own plants, it's best to yank the entire plant. 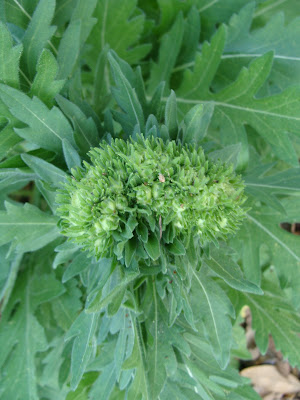 Back to what I did: I made a run to Lowe's (after a stop at Starbucks for iced green tea, the necessity for which stop rests squarely on the shoulders of Carol of May Dreams Gardens, who introduced me to this refreshing beverage). I went to Lowe's for rose soil, which I couldn't find. So I bought plants instead. I'd been thinking I needed another Sky Pencil Holly to go along the back fence, so I grabbed one of those. The clearance rack had some geraniums that only needed a bit of cleaning up to look good, so I took one of those off their hands. I also found a Hypericum cerastoides 'Silvana', a groundcover with tiny silver leaves and yellow flowers, on clearance. The pot says Forever & Ever Groundcover (TM), from the Berry Family of Nurseries in Talequah, Oklahoma. Maybe Dee of Red Dirt Ramblings knows that grower? I picked up a Phlox 'Chattahoochee', too. The blooms are a pale blue-lavender with a darker purple eye ... most fetching! (Sorry, no pictures, technical difficulties.)

I know I also worked out front for a bit but for the life of us, neither the Head Gardener nor I can remember what exactly we acccomplished. I think maybe it's time to sign off for the night and rest up. After all, tomorrow is another day! And in honor of the Executive Producer's late Aunt Margie, I'll add the same phrase she always did to the words of Scarlett O'Hara: "tomorrow is another day ... and ham is ham." To this day, no one's quite sure what prompted that. Was a ham involved? We'll never know.
Reve D'Or Scarlet Flax spiderwort