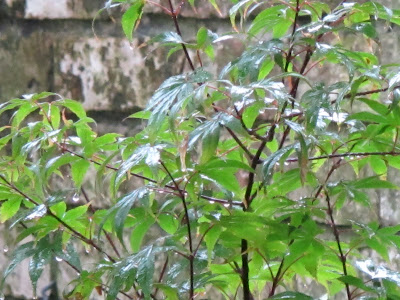 After the drought of 2006, I swore that no matter what the circumstances, I would never again complain about too much rain. I have kept that vow for the most part and even renewed it last summer, when I despaired of moisture ever falling on my garden again. I want to go on record as saying that this post is in no way a complaint. It is merely an observation on the recent state of the weather on my corner of Katy. Which more often than not this month has been wet. 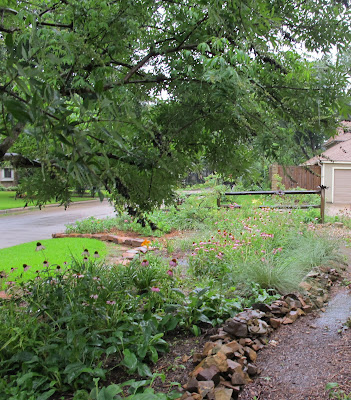 True, we've woken up to sunshine most mornings recently. As the day goes on, the clouds build as rain showers and thunderstorms move onshore from the Gulf of Mexico. Today's rain came mid-morning ... most days it's late afternoon or early evening when it hits. Annie the Garden Terrierist is not so fierce when it comes to thunder and lightning; just the sound of rain makes her start to quake. The Head Gardener says I've spent more time soothing Annie's frazzled nerves than working in the garden lately, but even she thinks that's as it should be. She's got a real soft spot when it comes to animals, especially the canine variety. 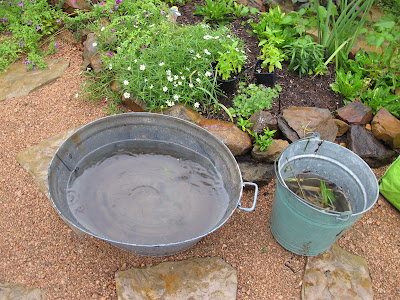 Since the ground has been so soaked, we've been reluctant to dump the pails and tubs of rain we've accumulated onto the ground. At the HG's suggestion, I turned one of the new trash cans into a makeshift rain barrel: each day I empty the contents of various containers into the 'barrel', check to make sure there are enough mosquito bits left to keep the wee beasties vanquished and then replace the lid until the next time. All too soon this rainy spell could end ... when it does, I'll have something saved for a non-rainy day!
rain

Unknown said…
I like the rain saving idea! I wish it would rain in south Louisiana. Even though Bonnie blew through here, we didn't get any rain! I was disappointed. Oh well, I plant mostly drought tolerant plants so I don't have to worry too much!
July 28, 2010 at 11:10 AM

Elizabeth Barrow said…
Mary I wish I could send you some of our rain. I live down the road a piece from Cindy and it seems like it's ark-building time.
We have three rain-barrels, and I "off-load" into old milk jugs and laundry-soap containers. But I don't think I'll ever be able to use the water!
July 28, 2010 at 12:43 PM

David said…
And this morning with all the clouds and nice breeze...could we say it was even....gasp.... 'cool'?
Or was I just imagining? :-)

Cindy, MCOK said…
Mary, the problem with south Louisiana and south central Texas is our plants have to be able to withstand extremes of both drought and deluge. It's not easy on them, is it? Thanks for visiting!

Elizabeth, today's showers have been light and brief. I think perhaps we're done for the day. I'm surprised that the ground isn't soggier ... I guess that's a sign of just how much catching up there was to do!

Meadowview Thymes said…
I wish some of that rain would come our way. It seems to fall all around Dallas, but not in my little backyard. Darn!
July 28, 2010 at 9:34 PM

Rose said…
Great way to conserve some rainwater without investing in a rain barrel, Cindy. I keep telling myself to stop complaining about the heat because I moaned so much about the cold last winter. But a happy medium would be nice, wouldn't it? Temperatures in the 70's and a gentle rain shower once a week sounds good to me:)
July 29, 2010 at 7:36 AM

ConsciousGardener said…
I'm loving this rain! I popped on this morning to see your 3 for Thursday and to say that I hyperlinked back to you since I'm joining in the fun! Have a great day!
July 29, 2010 at 9:01 AM

Cindy, MCOK said…
Linda, that happens here, too. Some storms bypass me completely and it's a mystery to me why they do!

Rose, a happy medium would indeed be fabulous! We're heading into a really hot period and I'm not thrilled about that! Yours will likely be of shorter duration than mine, at least.