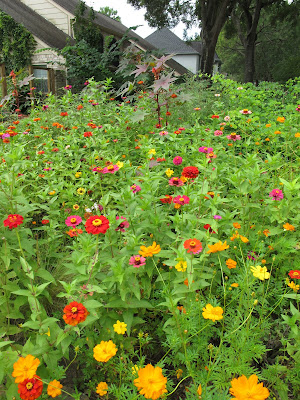 The corner bed, currently delighting passersby with Zinnias, Cosmos, Castor Bean 'Carmencita' and Bauhinia galpinii (aka Tina Turner)
Once again, here I sit, trying desperately to remember just what it was I did in the garden this week. Last year I was much more diligent in recording my activities in my Lee Valley Garden Journal ... this year, I have been sadly remiss, especially as the days got longer and the temperatures rose. Perhaps I need to set it on the table near the back door where I could jot things down each time I ventured inside for a break. I'll ponder that later ... back to the matter at hand ... I'm going to note things as they occur to me and not attempt to place them in chronological order. 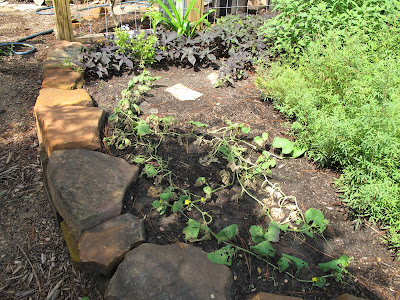 The Heart of Gold cantaloupe vines, started from seeds sent to me by Carol of May Dreams Gardens, are in sad shape. This isn't the first time I've grown cantaloupe but it's been 12 years since my surprising success ... surprising because I knew next to nothing at the time. Now I know more but you certainly couldn't tell that from the state of these vines. Perhaps Indy (as some of us call her) can put her head together with Hortense Hoelove and tell me if the problem is, as I suspect, too much rain. 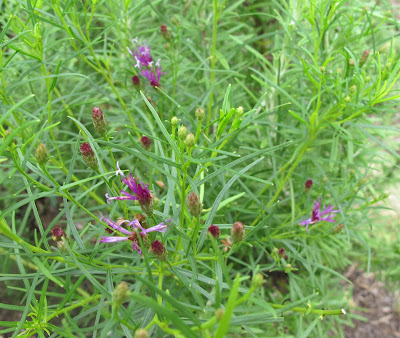 One of the happy surprises this week was finding the Ironweed (Vernonia lettermanii) blooming. I bought one of these plants at Plant Delights Nursery and only after I got home did I discover that I had a second one, a trial plant donated by a GWA vendor. They're both small and there aren't a lot of blooms, but I'm hoping that they will increase in size and vigor as they mature. The Head Gardener says they're a lot more likely to do so if I don't move them, as is my wont. Know-it-all.

Another happy surprise was to find that the 'Attraction' Buddleia I purchased at PDN is not only alive but has buds on it. It's hidden behind a Copper Canyon Daisy, which I believe I'll cut back a bit so the Buddleia can be seen. Dang, I forgot to take a picture when I was out with the camera. It's not like there's much to see yet, though.

My Tina Turner Bauhinia was not so privately dancing across the path behind the corner bed. I whacked her back a bit but she really needs some judicious pruning in all directions. It was just too hot and humid on that sunny corner to do more today. 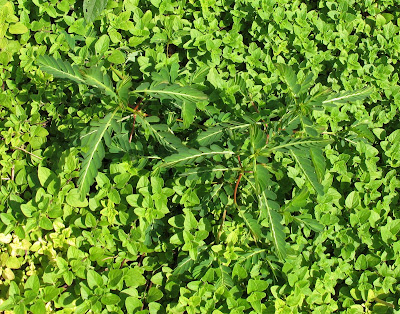 In talking with some of my fellow garden bloggers, the subject of mulch versus closely planted groundcovers came up. For many gardeners, the latter are effective in suppressing weeds. I offer the picture above to illustrate that it is not the case here on my corner of Katy, at least in the sunny areas of the gardens. That's something we call leaf-flower weed that came up in the midst of golden oregano. It's an evil, despicable weed that can grow up to a foot tall. Hate hate hate loathe despise and hate it. If anyone knows the botanical name, please tell me. 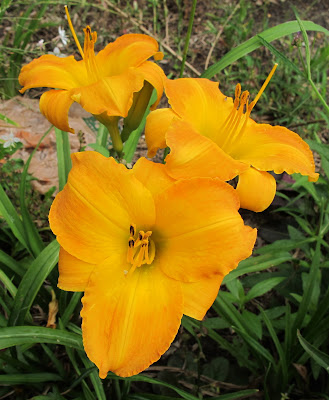 Hemerocallis 'Bittersweet Holiday' wins the prize this year for the latest repeat blooming daylily on my corner of Katy. Usually it's the unidentified pale lemon yellow daylily that takes the honors. 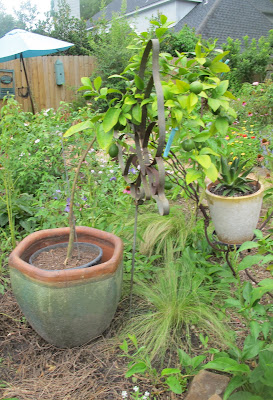 Speaking of lemons, I decided I should repot my Meyer Lemon tree, which is having a hard time standing erect due to the heavy weight of the fruit. When I first bought it in late spring, it had over 60 lemons on it. I was perturbed to see them withering and dropping off each day but now I see that the plant couldn't possibly support that many fruit at this size. I chose not to move it into the ceramic pot just yet because I feared it would lead to root rot. It would probably fare much better in the ground. Question for the citrus growers, since this is not my area of expertise: the leaves are not the healthy dark green they should be and I'm not sure what they need. That reminds me: after several years of allowing it to languish in a pot, I planted the Evergreen Wisteria on one of the side trellises. It too has pale greenish yellow leaves which should be a dark green. What do y'all think? Do they need more nitrogen?

One more thing before I go: That pot was one of several purchases at Nelson Water Gardens' annual Ding-Dang Sale. I came home with 3 gazing ball/pot stands; this pot; and 2 birdbaths, all for less than $75. Those in the Houston area might want to make a run over there to see what's left: they've taken further markdowns since I was there on Tuesday.

OK, enough for today. It's time for MAD MEN!

Dig, Grow, Compost, Blog said…
My potted Meyer lemon goes through periods of not-so-green. I just give it a little fish emulsion occasionally. I've also never been able to figure out what to do when it gets loaded with lemons. It leans how it wants and even heavy bamboo stakes don't seem to help. So I just let it lean for about 6 months til all the lemons are gone. :-)
btw, I can see why your corner is quite the showstopper right now!
July 26, 2010 at 9:50 PM

David said…
I agree with you in regards to chamberbitter AKA leafflower...hate hate hate
It's a persistant little rascal
and looks so dreadfully cute when it first pops up.
It's one of the very few plants I do not add to the compost pile.
BTW: Your garden looks great.
Always inspiring.
David at Tropical Texana (Houston)
July 27, 2010 at 1:19 AM

growingagardenindavis said…
Cindy, if you have alkaline water as I do, the answer to your citrus question might be coffee grounds. When Garden Rant had the authors of What's Wrong With My Plant field questions I asked them just that. They said it might be that the alkaline water here binds nutrients. They suggested mulching with coffee grounds. My trees, a few months later, are amazingly recovered.
July 27, 2010 at 4:23 PM

Cindy, MCOK said…
Krissy: mahalo nui loa, merci mille fois, danke schoen, muchas gracias and a big old Texas thank you, ma'am! I'm planning to do a page on weeds that afflict this area, and having the botanical name is important to me.

Jean, thanks for the info on support for the Meyer. I'll try fish emulsion, as well as the coffee grounds Leslie suggested.

David, I can't say that I agree with you about cute ... can we split the difference and I'll agree with the dreadful? LOL!

LornaJayne said…
Love your garden - I actually drive by it often - even if it's not exactly on my way home. I guess I am an admirer/stalker.
I have a question for you - it's about my bauhinia african red that I planted last fall. It's very healthy and leggy (like your Tina), but still no blooms. Maybe it doesn't get enough sun (only afternoon sun)? Do I need to add something to the soil? I am so looking forward to it being covered in blooms like yours was last summer/fall. Do you think mine will quit teasing me and start blooming soon? Thanks!
July 29, 2010 at 9:41 AM

Cindy, MCOK said…
LornaJayne, I'm always delighted to hear from someone who lives in my area! If you drive by and see me out there, please stop and say hi.

As for the Bauhinia, they do bloom much more profusely in full sun. I have a 2nd one planted where it gets a little shade and it's less floriferous. That said, I think it also has to do with maturity. Since yours was just planted last fall, it may take longer to bloom because of our cold winter. Mine are definitely coming back more slowly than I expected.
July 29, 2010 at 6:01 PM

LornaJayne said…
Thanks Cindy! I will look for you the next time I cruise past your lovely corner! I'll let you know how my bauhinia is doing too. I'm going to hope that she'll bloom later this summer or next year, since I really don't want to move her! I'm lucky to get everything planted once.
July 30, 2010 at 8:12 AM