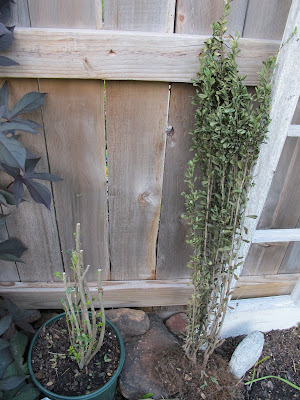 So as I mentioned in last week's wrap-up post, the Sky Pencil Hollies had been steadily declining, with only one of the 6 remaining plants in reasonably good health.  That was then ... this is now.  Yesterday the Head Gardener and I were dismayed to discover it too in a serious state of decline.  Although the HG originally intended to wait to yank them, we agreed to go ahead and remove them forthwith. Since the one on the left above had healthy new growth emerging at the base, we cut it back and will nurture it along to see how it does. Neither of us are convinced it will be with us for long but we're doing it mostly as an experiment.  The one on the right is there just to show you how bad a shape they were in.

Now for the true confessions, of which the HG wants no part. She's stomped off and is hiding somewhere in shame and abject humiliation.  She fears being she will be deemed unworthy to garden and stripped of her Felcos (when I pointed out that I'd already lost them, she was not amused).  I'm embarrassed to share our deficiencies and failings as gardeners with y'all but I will do it in the hope that it will save other gardeners, most particularly my fellow heat zone gardeners, from similar experiences. 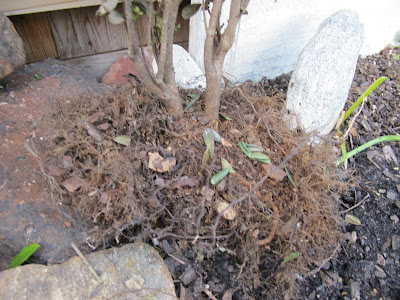 Although I washed off some of the planting mix, the picture above is pretty much how the roots of each shrub looked when I pulled them up.  Yes, it's been exceedingly hot and we've had very little rain lately. I have been watering each shrub individually during the dry periods and I thought I was drenching the soil thoroughly.  But it's clear to me that these shrubs have not gotten anywhere near enough moisture since I planted them in April and it's also clear to me that it takes a LOT more regular moisture that I realized, be it rain or supplemental watering, to keep plants healthy in my climate.
I've been gardening on this corner of Katy for over 13 years and you would think I knew what it takes to keep plants hydrated by now.  Clearly I did not in this case and that leads me to question whether I need to take a hard look at my watering practices in general.  I am still pondering just what I need to do differently.  There's only so much time for watering unless I stay up all night with the hose.  (The HG and I both get really cranky if we don't get enough sleep so that's not a viable option.)

There are quite a few other unanswered questions in my mind when it comes to the hollies, which lead me to question my gardening practices in general. One of those questions is whether I should have removed virtually all of the soil mix, such as it was, before planting these shrubs. I usually remove part of the If you enlarge the picture of the roots, you should be able to see the chunks of bark still clinging to the roots.  There was a lot of bark mulch in the soil mixture, and I'm wondering if it were too well-drained to retain moisture around the roots.  Bare-rooting them completely might have given them a better chance of survival. I've made it a practice to do that with plants in a peat-based soil mix but perhaps I should be doing that with all my plants.


I'm also questioning whether my soil is contributing to the problem. Good soil is certainly  a basic premise of gardening so I do add organic matter periodically, working in compost, manure or leaf mold.   But I have learned over the years that it breaks down very quickly in the summer months, especially in the full sun areas of the garden.  Looking at the soil as I removed these plants, I was concerned to see how gray and lifeless it appeared.  Then I look out my window at the sun beating down relentlessly and it's understandable how the soil could become depleted, especially without adequate rainfall.  When it's this hot and dry, the earthworms can't always survive to do their job.  What other bioorganisms are struggling that I can't see?

Finally, although the plant information on the tags stated the hollies needed full sun and were hardy in zones 5-9, no one would dispute that zone 9 in south central Texas is very different from zone 9 in Oregon or Washington state.  I should have listened to the HG when she voiced that concern and not been so sure that we could push the boundaries.  The hollies were planted in the bed along the back fence, which receives full sun from about noon till 6 pm.  Given that the temperature today was 100.9 at 4:30 in the afternoon, the plants in those beds have to be seriously heat tolerant and somewhat drought tolerant.  Need I say that I will not be replanting Sky Pencil hollies in the empty spots?  I have yet to decide what might go there instead but I do know I will be a bit more attentive to the HG'S concerns in the matter.

Right now I'm going to go coax the HG out from whatever closet she's been hiding in and pour her a glass of wine to improve her mood.  With 41 days of awful left, the only thing that might make her less surly is rain!

Rebecca said…
I have two Sky Pencils at the front of my house (north facing) and they are shaded from about 11:00 am onward. They get a lot of reflective light as the area is very bright but not a lot of direct sunlight. I also did wash almost all of the planting material away (the trick I learned from you) and they are kept rather moist because the area has a lot of clay and the roots are shaded. Mine are doing well and the one that is shaded the most has about 6 inch spires of new growth. The soil is not the best as it is right up against the house and seems to be mostly clay. So maybe you are right Katy's full sun is a whole other monster compared to others "full sun". Sorry that they did not work out for you, they are very attractive and evergreen.

I am really interested in this trick you have of washing all the soil off the roots. Having never lived in this climate, it is something I have never done before. Can you elaborate on it a little....Do you do this with all your new plants, or only certain species. I am hoping to start planting when it eventually cools, and any tips for planting in katy are helpful. Thanks
August 26, 2010 at 12:45 PM

I just pull my plants out of the container that they come in and set the potless plants in a 5 gallon bucket of water and let them soak. I usually do this while I am preparing the hole. I then swish them around until most of the soil or in some cases all of the soil is washed away leaving the roots free to swing in the breeze. I then put them in the prepared hole, backfill and then move onto the next plant. After I am done I use the “sludgy” water by pouring it around the new planted plants. If there is not enough sludgy water to adequately water the plant I then finish by watering in my plants using the water hose. The idea is that it causes the roots to spread out into the surrounding soil rather than try to survive cramped up in a little ball using the nutrient depleted container potting soil. I have seen a difference in my plants - particularly those that I planted in the spring when I go to remove them in the fall. In the past the roots would still be in that pot formed ball when I pulled out my plants at the end or the season or when they died. That ball seemed to be telling me that they never really connected to the surrounding nutrient enriched soil and often did not survive the summer even before it got really hot. Hope this helps! Cindy shared this on previous posts and I have found it seems to help.

Cindy, MCOK said…
Rebecca, I still have 2 Sky Pencils that I've potted up & cut back. I'm putting them in shady spots to see how they fare. I'm disappointed they didn't work out. I may try some Will Fleming upright hollies, since they're said to be better adapted to our area.

Tracey, Rebecca explained the process really well. Thanks, Rebecca! There are 2 posts from 2009 in which I talked about washing off the soil before planting.
August 27, 2010 at 7:07 PM