Bulbs and Buddies: Lessons In Companion Planting, Part One

on September 24, 2010
Last Saturday, I made the trek from my corner of Katy out to Tomball for an opportunity to hear boon traveling companions Chris Wiesinger of Southern Bulb Company and Heidi Sheesley of Treesearch Farms speak at The Arbor Gate nursery, host of the Bulbs & Buddies Bash, A Festival of Bulbs and their Companions.  The overflowing parking lot was testimony to how many Houston area gardeners were eager to hear what Chris and Heidi had to say.  We were not disappointed!
Chris, who is known as The Bulb Hunter, is a warm and engaging young man with a passion for bulbs.  A 2004 graduate of Texas A&M (for which this Rice graduate will excuse him), this is what his website has to say about his venture: The Southern Bulb Company, comprised of two dedicated bulb enthusiasts (plus friends and family), seeks to recapture something that was once "lost" to the Southern gardener: bulbs that thrive in warm climates, many of which are heirloom and rare flower bulbs. Our focus is to provide only those bulbs that will do excellent for the warm climate gardener and any tools, artwork, literature, education or clothing that supports our 'bulb habit.'
Chris' enthusiasm for bulbs that will grow in the hot and humid South is matched by Heidi's enthusiasm for native and adapted perennials, trees, shrubs, vines, bulbs and indeed any plant material that will also thrive in such climates.   Heidi is a lifelong horthead and plantaholic: when I mentioned Heidi's name to the late Madalene Hill at a seminar in the late 90s, Madalene had fond memories of five year old Heidi's enthusiasm for plants.  The owner and founder of wholesale grower Treesearch Farms, Heidi has been providing interesting, unusual and climate-appropriate plants to the Houston area for almost 20 years.  I've heard her speak several times over the last 12 years and I count her as a friend, as well as an enabler of the highest order when it comes to plants!  Many of the plants growing on my corner of Katy started life in Heidi's propagation facilities. 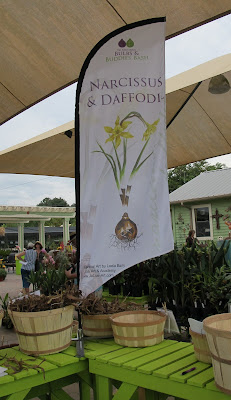 So what did these two knowledgeable and congenial folks have to share with us on Saturday? Today I'll focus on the bulbs that Chris recommends for the Southern gardener. If it's Narcissus you crave, there's a long list of those bulbs that will do well. Tazetta varieties include 'Golden Dawn', 'Grand Primo','Erlicheer', Falconet 'Double Roman', 'Italicus' and N. tazetta orientalis "Chinese Sacred Lily'. For those who want the large flowered Narcissus/Daffodils with trumpet-like blooms, look for 'Ice Follies', 'Fortune' and 'Carlton'. 'Jetfire' blooms on small compact plants about 12 inches tall, multiplies rapidly and should be divided and replanted every 3 to 5 years. Fragrant varieties included N. x intermedius 'Texas Star'; N. x odorus 'Campernelle'; N. x jonquilla 'Jonquil'; N. pseudonarcissus 'Lent Lily'; and N. 'Orange Phoenix'"Butter and Eggs". Looking for something unusual? Narcissus x medioluteus 'Twin Sisters' or N. bulbocodium 'Hoop Petticoat' are both precious and rare. Chris also carries two newer varieties of Paperwhites for forcing: 'Inbal' and 'Ariel', both from Israel and both with stronger stems than the traditional 'Ziva'.
While Chris does not carry large-flowered tulip varieties, he does offer some delightful small-flowered species tulips. Clusiana varieties include 'Chrysantha', 'Tubergen's Gem', 'Lady Jane' and 'Tinka'. Tulipa bakeri 'Lilac Wonder' is also available but he cautions that it is best suited for the more northern regions of the South. (I can attest to that, having tried and failed to grow them.) 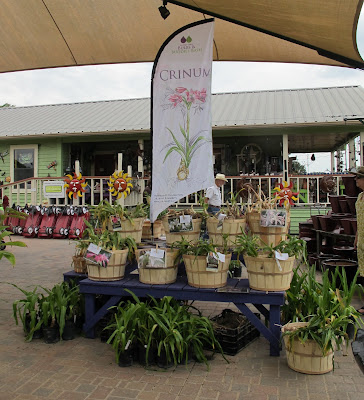 Crinums are one of the Southern Bulb Company specialties and a favorite of both Chris and Heidi for their robust natures and prolific blooms. The longtime Southern standby is burgundy-pink Crinum 'Ellen Bosanquet' (and just how to pronounce that, no one seems to know)(Ell-unn, y'all). Look for 'J.C. Harvey', 'Stars and Stripes', or 'Summer Nocturne'. Crinum digweedii, the Nassau lily; Crinum powellii 'Album'; and Crinum powellii roseum are also available. Chris tells us that he planted the latter in an abandoned field four years ago and walked away. The bulbs are now large clumps of five or more bulbs, bloom 2 or 3 times per year, and survive on no attention or supplemental watering. Now that's a Texas tough plant! 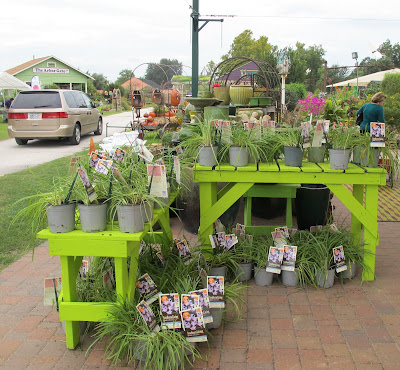 This bulb-hunting man has a definite passion for Rain Lilies, both Habranthus and Zephyranthes varieties. Since I've been regrettably short-changed in the last couple of months when it comes to rain, I've not had much opportunity lately to get excited about my rain lilies. As soon as they bloom again, I'll remember why I share Chris' fondness for them! Habranthus robustus varieties include the Pink species, 'Libra' and 'Russell Manning'. White, yellow and pink varieties of Zephyranthes include Z. candida, Z. sp. 'White Labuffarosea', Z. sp. 'Citrina', Z. macrosiphon Hidalgo Form, Z. grandiflora and Z. sp. 'Labuffarosea'. I'm especially interested in Z. 'Prairie Sunset', which sports coral and yellow blooms in partial shade or in full sun, and are drought tolerant. The corner bed needs these, don't y'all agree? 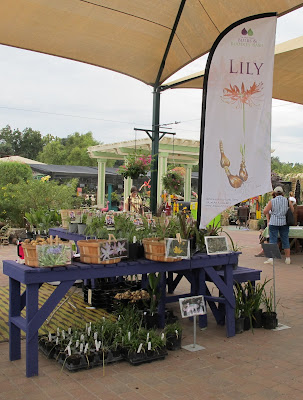 Other lily varieties to be found in the Southern Bulb catalog include Spider Lily varieties Hymenocallis acutifolia and H. littoralis, as well as Mexican River Lily, H. riparia. I had no idea that Tiger Lilies, Lilium lancifolium, would grow for us: those are going on my list, too! Both Chris and Heidi are fans of Philippine lilies, also known as Formosa lilies, which can be grown from bulb or seed. Blooms appear before foliage on both Blood Lily, Scadoxus multiflorus, and Flaming Torch Lily, S. natalensis, which flower in early summer: the giant globe-like flower heads have numerous star-shaped blooms. Also flowering before they produce foliage, Red Spider Lilies (Lycoris radiata) are a true Southern bulb: you may know them as Naked Ladies or Surprise Lilies.  A Central Texas favorite, Oxblood or Schoolhouse Lily, was brought to Texas by a German settler of New Braunfels at the end of the 19th century. This September bloomer brings with the promise that cooler temperatures are on the way. (Y'all know that's reason enough for me to plant it!)
Additional Southern favorites available from Chris include the shocking magenta April bloomer Byzantine Gladiolus (Gladiolus byzantinus), which thrives in the many different types of soil in the South. Leucojum aestivum, which many call Summer Snowflake or Snowdrops, blooms in late winter or early spring and is one of the easiest bulbs to grow in our area. For those of us who love blue, Spanish Bluebells (Hyacinthoides hispanica) prefers slightly wooded areas and multiplies quickly; Muscari neglectum, Grape Hyacinth, can reproduce by seed and naturalizes in many Southern gardens.

I hope my fellow Houston area gardeners will take a trip out to The Arbor Gate to peruse the bulb selection, thus supporting both a stellar independent garden center and a small but stellar grower.   In an industry that's dominated by chain stores and corporations, who have massive resources for advertising and marketing, it's critical to the success of businesses like The Arbor Gate and Southern Bulb Company that their customers help get the word out there about the advantages to buying from them.  Yes, the prices are often higher than what you would pay at larger stores and I know it behooves us all to save money where we can.  What you gain by paying more, however, is personal, knowledgeable assistance from people who share your passion for gardening and want to support you in your quest to grow a beautiful garden.   Our support of their efforts means that they'll be able to continue in their support of ours.
bulbs Chris Wiesinger Heidi Sheesley Southern Bulb Co. The Arbor Gate Treesearch

Elizabeth Barrow said…
Wonderful information! I've seen Chris speak before and he is quite engaging. I love bulbs -- among my favorites is sparaxis.
September 24, 2010 at 11:10 AM

Gail said…
Fantastic info Cindy. It sounds like a great presentation and what wonderful resources they are to a horthead like you! How do you think some of the crinums and glads would do at C&L? gail
September 26, 2010 at 6:11 AM

Bulb Hunter said…
Cindy! Great blog! It was great to see you again and hope you can come up to the farm soon. Rebecca and I are finally enjoying the cooler weather and start shipping out fall orders this week.
September 27, 2010 at 10:46 AM