Cassandra Has Left the Building ... 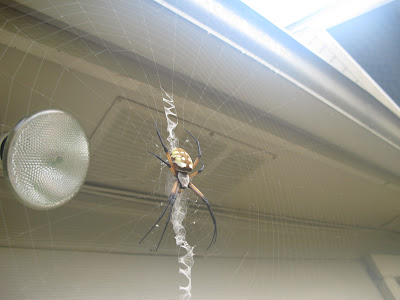 Or more accurately, the web.  Working outside yesterday, I walked by to find her hanging on one side of her web, rather than in the center.  Her legs were oddly positioned and she was so still that I began to worry about her.  I found a twig and she did shift her position slightly when I very gently touched the twig to one of her legs.  Later that day, I walked by again and she had disappeared. Most Orbweavers will stay with their web unless it is frequently disturbed or they cannot catch enough food there.  Perhaps Professor Trelawney was searching for a quieter spot or perhaps she moved on in search of better cuisine.  It's possible that she has shuffled off this mortal coil.  Although it's possible for female argiope spiders to live several years in Houston's mild climate, a year is the average life span for these arachnids. 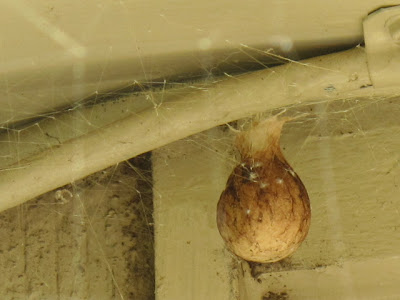 She did leave behind a future generation of Argiope aurantias, now incubating in their cozy sac. Based on the information I found on several  entomology websites, young orbweavers may not appear until spring even if they hatch in the fall.  Hatchlings overwinter in the egg sac if it is too cold for them to emerge.  Given our recent temperatures, though, I expect to be showing y'all pictures of young spiderlings before very long!
argiope spiders

Gail said…
I disturbed an egg sac and the little babies all spilled out! I felt badly, moved it outside. But it's my screened porch and I can't have a million baby spiders climbing on guests!
September 19, 2010 at 9:53 PM

Cindy, MCOK said…
I've been checking it daily and see no signs of activity yet. My friends are a bit perturbed at the idea of several hundred spiderlings stalking the garden!
September 24, 2010 at 9:23 PM