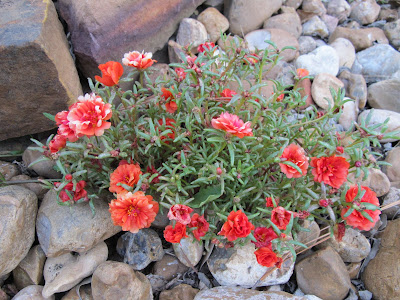 #1:     Watered.  Due to the aforementioned lack of rain, I'm having to take hose in hand on a daily basis. 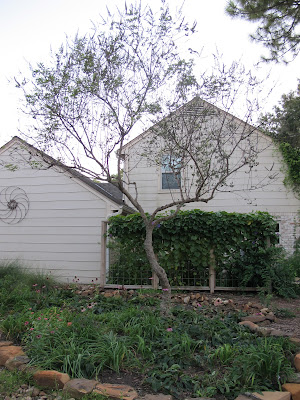 #2:     Lopped a limb off the 'Montrose Purple' Vitex and was immediately happier with how it looked.  As beautiful as it is in bloom, I've not been satisfied with the shape of it for a long time. I didn't do a good pruning job early on.  I may yet whack it down to the ground and let it regrow into a multi-trunked tree.
#3:     Weeded.  The confounded Dallas Grass, Gripeweed and Spurge continue to plague me.
#4:     Watered again. 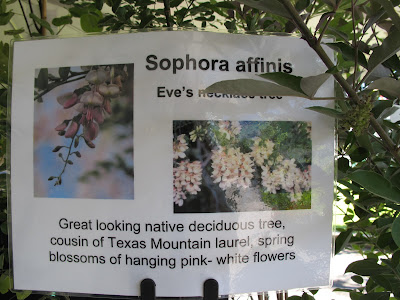 #5:   Visited the 68th Annual Bulb & Plant Mart on opening day, Thursday the 7th. For the first time ever, I bought nothing.  Due to a new system using scanners and UPC labels, the line to check out was too long for me to consider the time spent waiting in it worthwhile.  I hear the line moved much more quickly later in the day. I'm going to miss handing my form to a Garden Club member to record the plant and the price in green ink, though.  (Eve's Necklace is on my wish list after seeing this picture.) 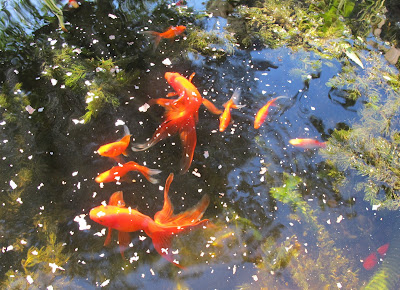 #6:     Discovered that there are actually NINE juvenile Japanese fantails in the pond, one more than previously counted. 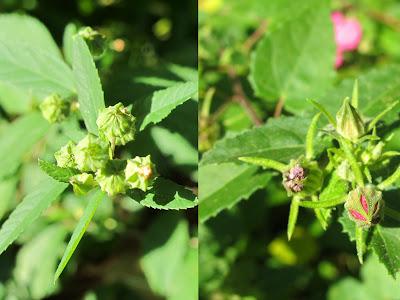 #7:     Found the plant on the left in the back garden and based on its similarity to the plant on the right, I'm convinced Lefty is a species of Pavonia.  That's Pavonia lasiopetala on the right, aka Rock Rose.  The plant on the left has small yellow blooms, about the size of a dime.  I know at some point in the past I'd purchased a yellow Pavonia.  Whether this is it, I can't say.
#8:     Sat.  I had planned to drive over to Austin on Friday but a low-grade bug of some kind had me feeling puny most of the week.  So I sat out front and sketched the expanded planting areas, then perused plant catalogs from the various local sales I've attended recently.  I compiled a lengthy wish list and hope to start shopping next week.  Otahal and crew are on tap to help me plant.

#9:     Had the Executive Producer stabilize 'Kolomikta' so it wouldn't fall off 'Table With Legs'.  He pounded masonry nails into the brick, wrapped fishing line discreetly around a portion of 'Kolomikta' and then attached that to the nails.   I'm still playing around with plant placement and trying to come up with the right containers and plants to go on either side.
#10:     Watered MORE.
10/10/10

I think it's all that watering that has made you puny! ;-) Missed you in Austin. Next time.

David said…
My 10 things were ALL watering. Ugh! I water just to keep things alive, but now it's becoming the deep watering game...and it's going to make my water bill a scary sight. Wonder if it's going to arrive on October 31st.

Commonweeder said…
I'm not allowed to water anymore. I am praying the promised rain storm does arrive tomorrow night!
October 14, 2010 at 7:09 AM

Floridagirl said…
I, Cindy, love your blog. Don't know how I've missed it all these months! Must say I thought your name was Katy though, but I see that is where you live. I am adding you to my blogroll; hope you don't mind as we are a Florida blog.