Love Amongst the Roses

on February 24, 2009
I'd been talking with fellow garden bloggers on Plurk and wondering what to do about Rosa 'Mutabilis'. I'd taken pruners and loppers to her back in January, attempting to wrestle her into submission. The picture below shows her a bit more restrained than when I started ... but far from submissive!

Rosa 'Mutabilis' after the first round of pruning a few weeks ago. She started life in a 4 inch pot as a cutting given to me by one of the Texas Rose Rustlers. 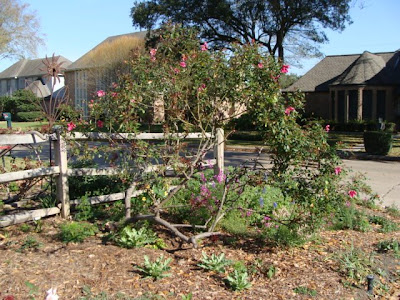 Both Dee of Red Dirt Ramblings and MaryAnn of Idahogardener have experience pruning old roses and they're the ones who told me a reciprocating saw, especially a cordless one, would make my task much easier. So when EM asked what I wanted for Valentine's Day, I knew right away what to tell him. I even made it easy on him by buying it myself. As it turned out, I might have saved myself a trip. I got the saw home and discovered that it did not come with a battery and charger, a fact not mentioned by the salesman at Sears Hardware. On my return trip, a different salesman was as indignant as the Plurkettes that this not so small detail went unremarked. What's more, after querying me as to what I planned to do with this tool, he presented me with another option: a set of 4 cordless power tools with charger and 2 battery packs, for only $40 more than it would cost to buy the saw/battery/charger separately. EM was delighted when I proposed we make this our mutual Valentine's Day gift. After all, nothing says love like a reciprocating saw.

So yesterday morning, I headed out to the rose bed with saw in hand, ready to do what had to be done. I did pause beforehand to take a picture from another vantage point. That's Madame Antoine Mari in the foreground, another leggy beauty. The pale pink bloom at the top is hers. She too had been previously pruned with less than satisfactory results. She continued to bloom but her shape was less than graceful. The trunk of Mutabilis is just behind the bag of soil I forgot to remove before taking the picture. (This is a working garden, not always prettified for photo ops!) 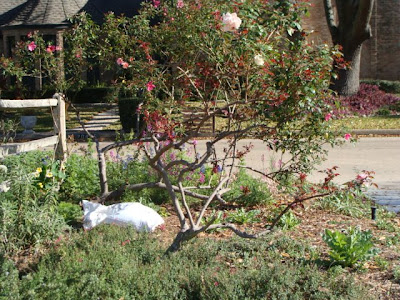 Mutabilis: the after picture. I'm wondering if I should have cut her back even further. MA & Dee, or any other rosarians, what do y'all think? 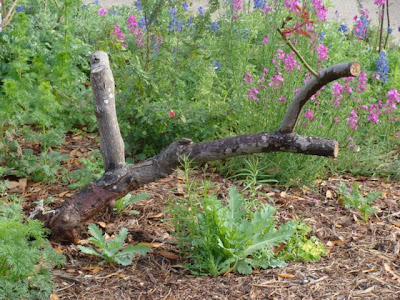 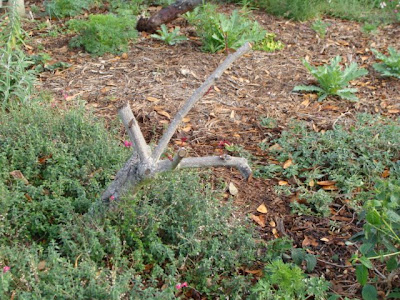 I'm quite enamored of the reciprocating saw, by the way. I used it on a few other wayward plants before I put it away for the day. I don't expect that I'll think of EM and sigh in girlish bliss each time I use it but it WAS just what I wanted ... that's love amongst the roses, MCOK style!
Madame Antoine Mari Mutabilis old garden roses pruning

Mr. McGregor's Daughter said…
Wow, that's some seriously drastic pruning. Those old Roses must be really tough. I think I might have to look into getting a reciprocating saw.
February 24, 2009 at 10:00 AM

Anonymous said…
Cindy, I don't think I would take it down any further than that. 'Mutabilis' doesn't grow like that this far north. I'm kind of at the edge of its zone. It is happy here now, but I had to move it three times.~~Dee
February 24, 2009 at 10:17 AM

Gail said…
Goodness is that ever a serious sized rose! I can see why a heavy duty saw was needed. I've just been given a Lady Banks rose..which is marginal here. I read that she can get quite large, too. Do you grow her?

Carol Michel said…
You sure did take down that rose! That saw sounds like the perfect gift for any gardener.

Kathy said…
I wonder if a reciprocating saw would work well to prune an overgrown lilac? How thick would be too thick of a branch?
February 24, 2009 at 8:05 PM

Meadowview Thymes said…
You are a brave lady! I bet the rose bush will thank you and produce beautiful blooms this spring!
February 24, 2009 at 9:12 PM

Cindy, MCOK said…
I'm optimistic that the drastic pruning will rejuvenate Mutabilis and not send her into a decline. If I'm wrong, well, it's an opportunity to plant another rose there!

Gail, I don't grow Lady Banks but I hear the same thing you do ... she can get to be quite the lady of the manor.

Kathy, I'm new to this saw, so I really don't know if there's a limit to how thick a branch it can handle. Based on what I observed during the pruning session, though, it's more a question of how steady you can keep your hand and arm. It managed 2-3 inch branches without a problem.
February 24, 2009 at 10:02 PM

Lori said…
Whoa, that is some drastic pruning! I had no idea that you could take so much off without seriously stressing the plant. Hopefully it'll fill out and become bushy again before too long.

I've finished almost all my spring pruning, but I have no idea how to prune the shrub Maggie that I'm growing as a climber against the fence. When you train a climber cane horizontally and it sends out long vertical shoots, are you supposed to cut all those off or maybe peg them down so they flower more? I have no idea what to do, but I want most of the plant up high on the fence so I can put 5' purple-leafed cannas in front of it. Any advice? None of my other climbers are that large, so the issue hasn't come up before.
February 25, 2009 at 4:38 AM

Cindy, MCOK said…
Lori, I'll be watching Mutabilis over the next couple of weeks. If she responds as I expect and hope, then I'll be glad I whacked her back so thoroughly. Whatever the results, I will post about them.

Re Maggie, I see that in Bill Welch's book on antique roses, he mentions growing her as a climber on a pillar or post but doesn't give any specific advice. Mike Shoup mentions training her on a trellis. I'd say no to cutting off the new shoots because those are what will give you more blooms. Since you want the plant to grow high, I don't think you'd want to peg them, either. Let me ask a couple of more experienced rosarians and get back to you!
February 25, 2009 at 10:51 AM

Cindy, MCOK said…
Lori, here's what my rosarian friend in Corpus Christi says about training Maggie: Climbers should be trained with the tips of the canes pointing down. This can be done in a lot of ways, but the easiest since she has it along a fence, is to tie plant tie or something similar to the end of each long cane, and then make an arch of that cane, so that the tip end is pointing down. This forces new growth along the length of the cane instead of just at the very end. Roses are apically dominant. Essentially, this means that growth is stronger near the top and the rose only wants to bloom at the very tip. By training it to grow horizontally instead of letting those long canes go straight up, more flowers. It's a long process, as each time a new cane emerges and blooms, that cane needs to be tied off horizontally too.
February 25, 2009 at 2:29 PM

Nancy said…
I think that as long as the saw blade is the right type for the material you're cutting (metal/wood/plastic), there's not much a reciprocating saw CAN'T handle. I love mine.

Curtis W. Jackson said…
Hello,
Your corner of Katy is worth seeing, I would like to visit. I appreciate the photos of your handiwork, you should have your own, HGTV show.
However there is another corner of Katy, Texas I feel you local folks should be aware of. It is at the company, Katy Flyer.
This major, classified ad business had be defrauding its' contracted distributers of promised income for years. Your research may reveal the truth of this matter.
I am wondering if your local lawmakers are concerned of Katy Flyers' injustice to people nationwide. But may more of us know about good people such as you.
Sincerely,
Curtis
http://curtisonthenews.blogspot.com/2009/02/scam-report-katy-flyer-distribution.html
February 25, 2009 at 8:46 PM

Brenda Pruitt said…
Once I start hacking, I have trouble deciding when to stop. So I try not to go out there with pruners in my hand. Or I'll end up with twigs! All I have are newer type roses. So they're safe for now!
Brenda
February 27, 2009 at 5:22 PM

Annie in Austin said…
This is pretty scary looking, Cindy. How long did it take for your mutabilis to get the point where a reciprocating saw became a pruning tool?

I've had my two mutabilis roses less than two years and they don't have anything approaching a "trunk" yet - but guess I'd better keep an eye on them!